Home > News > Strong winds cause localised damage in A... 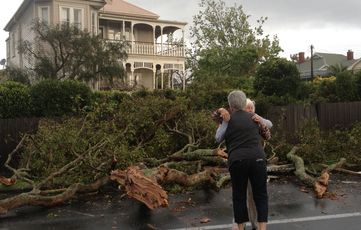 The Fire Service said it had received reports of trees and power lines brought down in the area around Wairoa Rd and Vauxhall Rd, Devonport.

Debris littered Vauxhall Rd and large sheets of corrugated iron hung on power lines like washing hung up to dry.

A police officer was overheard saying a house had been “completely flattened”.

Stunned Devonport residents converged near a police cordon to see what was going on.

“We heard the wind coming through first. We heard this really loud whistling sound and then it came towards us but then veered off a bit,” resident Paul Dalebroux said.

It pushed trampolines over and caused damage to numerous houses, he said.

“It wasn’t very big so it wasn’t that scary,” he said.

But his daughter, Chantal, 12, disagreed: “Yes it was. We were sheltering in the hinges of the bathroom door,” she said.

Victoria Silvey, 12, was in her lounge when she saw timber, leaves and poles “floating in the air”.

They were whirling around in a funnel that lasted about 30 seconds before leaving the area, she said.

Callers to the Fire Service reported seeing a tornado but both MetService and WeatherWatch said there was no evidence of that.

WeatherWatch said their initial thoughts were that it was “probably a straightline squall wind” that followed a sudden downpour.

Significant thunderstorms are currently forming over Waikato, WeatherWatch said. They are forecast to be much more severe than the ones exprienced in Auckland this afternoon.

See a photo gallery of the damage here: