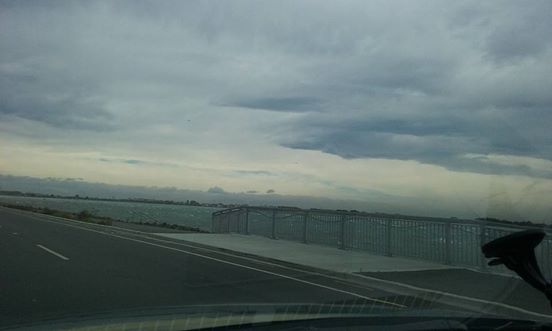 Strong winds are wreaking havoc in Canterbury causing the cancellation of flights, lifting iron off roofs and temporarily silencing the international buskers festival.

Police have urged motorists to take extreme care as gales force winds of up to 100kph batter the region, making for hazardous driving conditions.

More than 160 Canterbury residents are still without power after strong gales battered the region.

Fire services responded to around a dozen call outs today in relation to fallen trees and power lines.

Shows have been cancelled today at #wbf2016 due to high winds. Half a tree fell down onto a tram line. Not just a tram line, the only tram line in Christchurch

Wind has felled a central city tree which has closed Armagh St at the intersection of Park Terrace, and Park Terrace between Armagh and Kilmore Streets.

A spokesman for the Christchurch Transport Operations Centre (CTOC) said the tree removal process will take most of the day.

“We have been advised that these roads won’t open until at least 6pm tonight,” he said.

Oh no! The strong winds knocked a massive tree onto the road. #Christchurch #NewZealand pic.twitter.com/GUT2J9lAfE

Organisers of the World Busker’s Festival in Hagley Park were forced to cancel all performances during the day due to safety concerns, but confirmed the night shows would go ahead as scheduled.

Police said motorists needed to take extra care travelling on SH1 near the Rakaia River with winds expected to whip up dust and obscuring vision.

People using streets around the rebuild in Christchurch were also being warned to keep watch for lose temporary traffic equipment like fences and cones being swept up in the wind.

A fresh warning was also issued for vehicles using the Rimutaka Hill, especially trucks and motorcycles.

Christchurch resident Charlotte Fraser said it had been very, very windy — almost like a storm – this morning.

“I was driving along with my windows down and a huge gust of wind blew leaves into my car,” she said.

“I also saw a cyclist who looked like he was going to come off his bike.

Massive dust storm over Christchurch. Just coming out of Sumner and the wind has picked up, we had trouble walking back to the car.

“He was biking really slowly and his front wheel kept going from left to right. He was really struggling.”

The last couple of hours had been particularly crazy, Ms Fraser said.

The wind seemed to be starting to settle down now, though.

Jessica Campbell, who works in the city centre, said the wind had been loud in the past couple of hours.

“I’ve been inside most of the day but I could hear it, and I’ve heard people talking about it,” she said.

“It’s finished now. I went outside just before and there were leaves on the road and a lady carrying a branch down Colombo St.”

Rachel Gaffaney, who works near Christchurch airport, said she had seen a few people struggling in the wind.

“I saw couple of people getting blown around,” she said.

“I haven’t come across anything fallen over but a couple of people at work have said they’ve seen branches down,” she said.

“Apparently it was really dusty in Rakaia (south of Christchurch) this morning.”