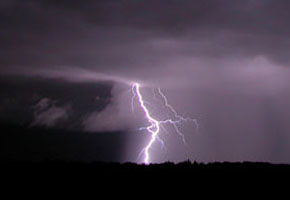 Up to 40mm of rain has fallen on parts of the Northern Territory as storms moved through overnight.

A low pressure trough over the territory has triggered long-lasting widespread storms overnight. Storms sparked to life during the afternoon over inland parts such as Elliott in the Barkly district. The storms then moved northwest, through Victoria River and reached Darwin over 12 hours later at approximately 3am.

Bradshaw, in Victoria River, recorded a total of 29mm with 11mm falling in just 10 minutes. The storms also brought a welcome relief from the heat with a drop of seven degrees in 20 minutes.

The Darwin-Daly district recorded the highest and heaviest totals in the territory. Douglas River picked up 40mm and Noonamah had 12mm in 10 minutes. As the storm rumbled through Darwin it dumped 32mm on the city, including 6mm in 10 minutes.

Storms will clear this morning before redeveloping again this afternoon.

The trough responsible will linger over the region in the coming days and will continue to bring the risk of storms. Inland areas are likely to see the heaviest falls.