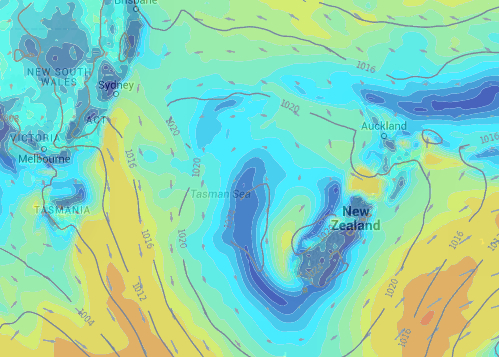 Friday’s situation is looking a little complicated, but it’s looking like a calm and settled day nonetheless, as the systems above us will keep things pretty calm.

A ridge lies over much of the North Island, which is connected by two high pressure systems either side of the country.
The first is west of the South Island’s West Coast in the Tasman, while the other lies to the east of Central New Zealand, in the Pacific Ocean.

This means the North Island is looking good – mostly sunny, some light winds around both coasts, but the chance of a brief shower about the Central North Island and Waikato, though not until late in the afternoon.
Wellington is looking at northerlies for much of the day too, though by Wellington standards, they won’t be anything to worry about.

At the top of the island, Nelson is looking good (as usual), light winds in the morning becoming a little gustier after lunch, coming from the north.

Along the east coast of the South Island it’s a similar story – starting off nice and sunny, with northeasterlies right on the coast and light winds, meaning warmer termperatures.
On the opposite side, the West Coast is in for more of the same – sunny and generally calm, west to northwest winds the only thing to look out for – and the same goes for Southland.

In Otago, breezy northeasterlies will blow near the coast, while inland they will tend more northwest.

The place to be:

Temperatures for both islands will sit in the 20s – with inland eastern Otago looking the warmest at this stage – could come close to 30 in the afternoon.