Spring-like pattern set to continue into February for many regions 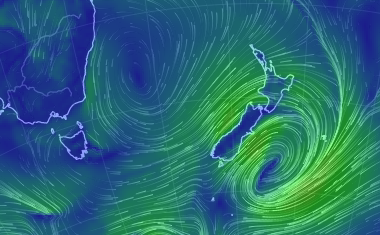 Another January day and another round of complaints on social media about the ‘awful’ weather impacting some of our biggest centres. Wellingtonians and others in the lower North Island are enjoying Anniversary Day today but for many it will be a windy, wet, day.

It’s windy, wet and cool in Dunedin too as the back end of the weekend storm tracks by.

WeatherWatch.co.nz says while summer is spluttering for some it’s very clear how the weather patterns are behaving. “La Nina has failed to affect New Zealand and instead the pattern around Australia and New Zealand is fueling a brisk westerly flow which impacts the South Island and lower North Island the most and is why we’ve been seeing a more spring-like pattern which has days of cold with snow on the ranges and other days of warmer winds – and no shortage of windy days”.

The current weekly poll at WeatherWatch.co.nz this week asks what weather you want in February – overwhelmingly the vote that is winning so far is “Less wind” at 41% followed by “Hotter” at 23%. The poll doesn’t close until Saturday.

Mr Duncan says the windy weather isn’t going away soon. “While many places will have less rain over the next 10 days, along with a reduced chance of severe weather, we do still see windy weather surging up over the South Island and into the lower North Island”.

For example, over the next 14 days Wellington is expected to have at least 10 days with winds blowing – although the skies will be mainly dry, except for a two or three days with shower risks.

The further north and north east you go the more summer-like the weather will be.

For example, over the next 14 days Gisborne is expected to be mostly sunny and dry with highs in the late 20s right up to the mid (even late) 30s.

High pressure will also dominate Auckland more often (and Coromandel Peninsula) with daytime highs creeping back up into the mid 20s and a mix of sun and cloud. Today, Monday, looks to be the windiest with wind flows generally coming in from the westerly quarter and a couple of remaining showers.

“The Tropics are still having a quiet period between active cyclones” says Mr McDavitt. “Rather unusual for it to be so quiet for so longâ€¦NASA has noticed this anomaly and is Facebooking about it at: www.facebook.com/NASAHurricane/“

“My theory, as far as South Pacific is concerned is that the recent temperature anomaly between (hotter than normal) Australia and (colder than normal ) NZ has been producing more westerly winds, knocking the subtropical ridge north of normal, and thus weakening the SPCZ. We had those two deep lows across NZ as mentioned in last weekâ€™s weather gram, and I think this means the subtropical ridge is now about to be able to shift south onto central/southern NZ during next few weeks” says McDavitt.