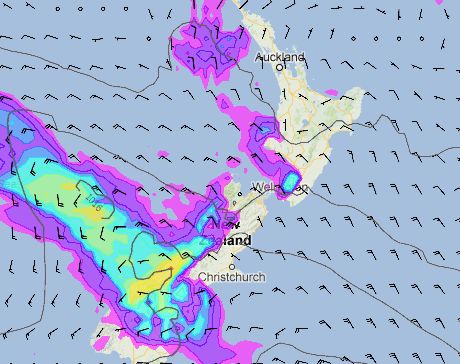 High pressure will strengthen as it slowly crosses the country tomorrow.  As it does, a northerly flow will develop about the western North Island and west/northwest flow will set up for the western Mainland.

This could bring some precipitation to both islands tomorrow.

On the North Island, a few showers will be possible about the northern tip during the morning and afternoon thanks to the persistent easterly flow that is expected to remain in place.  Along the western and lower part of the island, coastal sections could see some precipitation develop during the afternoon and evening.

On the South Island, the West Coast will likely see showers increase and strength and areal coverage as we go throughout the day.  Not only will the onshore flow keep the showers going, the Southern Ocean front is expected to come on shore and help to keep the rain chances going.  In fact, this front will be the focus for showers as it heads slowly north on Friday.

This front may washout by the time it reaches the North Island on Saturday.  However, some rain chances will still be possible for the lower half of the island during the morning and afternoon.