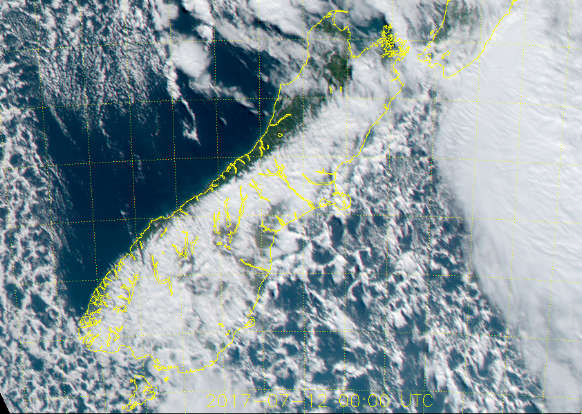 It’s bitterly cold with snow and rain showers peppering the eastern and southern sides of the South Island during Wednesday afternoon but beautifully sunny on the West Coast.

The forecast and set up is varied within each South Island region, so we’ve tried to break it up a bit.

CANTERBURY:
The snow level in Christchurch for the rest of Wednesday remains incredibly close to the city – just 100 to 200m above it. Think of that short distance along a street and you suddenly realise just how close the city is to snow, but it’s just a degree or two too warm for snow settling in the city (as this isn’t an Antarctic blast, it’s just a very cold wintry southerly). We’ve had a few reports today of snow here and there in various Christchurch suburbs – and the risk remains pretty much the the same overnight, but with darkness comes a slightly higher chance of sea level snow, amongst the rain showers. Don’t expect to build a snowman – but fingers crossed you get to!

For farmers and those at higher altitudes the snow showers will continue today with heaviest falls in North Canterbury. Generally it’s coming in as showers with long dry spells. As the low in the North Island develops it will continue to feed moisture into Canterbury, but through Thursday the snow level starts to lift.

Keep up to date with our very detailed Christchurch forecast for snow levels – as it starts to creep up on Thursday.

OTAGO, SOUTHLAND, ALPINE AREAS SOUTH OF TEKAPO
Dunedin has seen sea level snow showers across Wednesday and this evening the snow showers continue but the level they fall to starts to rise overnight. The snow level is going to rise slightly across Otago and Southland into and across Thursday, where things will dry out further too. There will be a lot less snow on Thursday as high pressure builds from Australia. Still, snow flurries are likely – mainly in the morning.

WeatherWatch.co.nz is forecasting overnight lows around dawn on Friday morning to be down to -6 in Queenstown and may even go down to -10 through the alpine interior. Severe frosts and black ice will pose travel concerns on Friday morning for motorists in parts of Southland, Otago and Canterbury. There may also be black ice on the highways tomorrow morning (Thursday), depending on conditions overnight.

WEST COAST & NELSON
Check out the amazing satellite image, taken mid-Wednesday afternoon by the Japanese Meteorological Agency. The Southern Alps are perfectly stopping the clouds – a great demonstration on how New Zealand’s mountains and ranges really impact our weather from region to region (the flip side of today’s satellite map would be when it’s raining on the West Coast but a hot, dry, sunny nor’wester is in Canterbury).

With winds continuing from the easterly quarter over the next two days the West Coast will have mainly sunny weather. So much for the myth it’s always raining there. Often it’s sunny when a southerly or easterly is at play.

However…heavy rain returns on Sunday to the West Coast.

MARLBOROUGH
As the low in the North Island deepens the gale to severe gale SSE winds will brush Marlborough, making for a cloudy but fairly dry, cold and windy Thursday in Blenheim. Snow showers continue to fairly low levels on the ranges, especially eastern hills and ranges with flurries to 300 or 400m. The worst winds will be in Cook Strait and brushing the Sounds. A sunny, dry, weekend is forecast with frosts likely on Saturday as winds fade to calm.