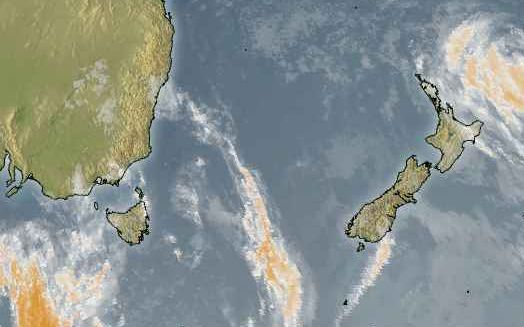 Many parts of SA have just had their warmest start to August in decades but the warm spell will end before the weekend – and this cold change is heading towards New Zealand on Sunday.

Many parts of SA have recorded maximum temperatures not seen at this time of year since 1975. This is all thanks to a large high that has been centred across the southeast of Australia directing warm northerly winds across SA.

The warmest temperatures have occurred across the Northeast Pastoral District and extending to northwestern towns such as Coober Pedy. Those areas have seen temperatures as much as 8-12 degrees above average for this time of year.

Adelaide can expect its highest maximum temperature in 3 months today, with a high of 26 degrees, which is 8 above average. However, a change will come with a cold front that will approach from the west this evening. The recent high temperatures will drop back closer to average by the weekend as a pool of cold air moves across from southern WA.

The bright side of the mid winter warmth coming to an end is that much needed rain will replace those warm days. The rain will affect the southern half of SA over the next 72 hours, with widespread 10-20mm falls and locally heavier totals of 30-40mm near the coast.

The cold change will also push into New Zealand this weekend, starting in the deep south later on Saturday and then the North Island on Sunday.