Home > News > Some snow for the South Island high coun...

Some snow for the South Island high country late Saturday 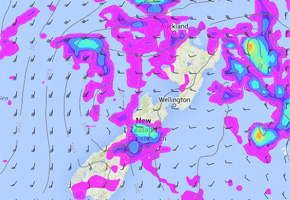 A cold southerly airflow pushes into the lower South Island on Saturday afternoon then moves north into Canterbury later in the evening, it brings cold air and the potential for snow. This surge of cold air is fairly quick moving though so wonâ€™t hang around for long.

Southerlies push into Southland and Otago around midday or early afternoon, expect showers and snow flurries to 800m initially then lowering to 400m later in the evening before clearing.

Southerlies and showers move into South Canterbury late afternoon then further north later in the evening, areas of precipitation will be a bit heavier about Canterbury then further south. Expect snow to 800m once
again as showers begin, lowering to 500m overnight. Due to the southerly nature
of this system, showers / rain or snow will penetrate further inland then past
events this winter where showers and snow has often only teased the coastline in
southwesterly conditions.

This system will be nice boost to some ski fields as the end of the season draws near. Farmers about the Canterbury high country should take note of the weather moving in too, 15 to 20cm is possible above 800m, 10cm above 600m then lesser amounts down to 500m Saturday evening and overnight.

Further north into Marlborough the cold air doesnâ€™t arrive till early Sunday morning, precipitations levels will not be too significant and snow levels will be higher too so the risks of adverse weather does subside. Early Sunday morning could see 2 or 3 centimetres of snow down to 600m then clearing away.

The West Coast of the South Island doesn’t see snow although it may spill a little westward of the main divide as the system pushes through later on Saturday. It would be worth keeping an eye on road conditions overnight Saturday if considering travelling to the West Coast, you can keep an eye on them at the two sites below: