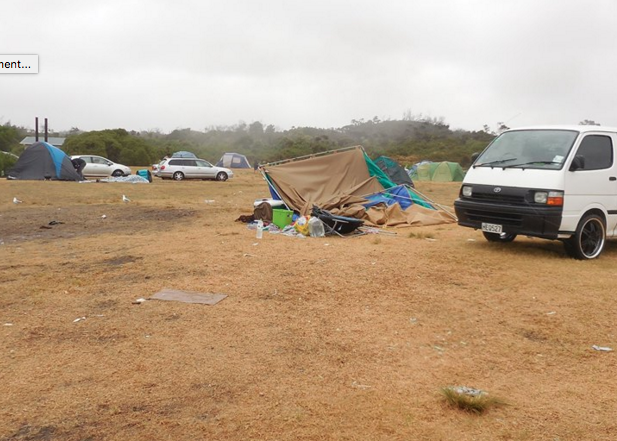 Drenched campers have abandoned their holidays after driving rain soaked tents and flooded sites at some of the country’s most popular summer spots.

More than 50mm of rain fell in just four hours in the worst-hit areas of Coromandel, Northland and Auckland yesterday morning and strong winds added to the miserable conditions throughout the day.

More downfalls are predicted for the upper North Island on Saturday, as well as a first taste of the bad weather for those further south.

Campsites emptied as the storm hit – by lunchtime yesterday only 20 out of almost 400 campers remained at one Coromandel ground, while almost 600 packed up and fled from another.

“The storm hit about 3am, so a few people started battening down the hatches but it’s all chaos here – there’s people that arrived here [on Thursday], their tents are just rubble on the floor.”

Popular Uretiti was also hit as the storm swept down the country.

“The wind suddenly started to get up and was whipping everything around,” said 17-year-old Hannah Dowsett, who was camping with three friends.

“Then the rain came and very soon we were freezing. We were on alert all night because the tents were shaking and other people whose tents were destroyed were coming to us looking for shelter.”

The girls were part of a 30-strong group of youngsters celebrating recently leaving Mt Albert Grammar. They said the campsite was filled with hundreds of holidaymakers, but by yesterday morning most had packed up and left after strong winds ripped tent pegs out of the ground.

The girls made early morning calls to parents in Auckland to ask them to rescue them.

“When we arrived on Thursday the weather was great,” friend Tara Davey said. “We were even advised to keep a bucket of water by our tents in case there was a fire because it was so dry.

“But last night it was a different story and the wind and rain was horrible. The front flap of our tent was flipped open and all our food got soaked.”

Other campers struggled to save their equipment as winds up to 75km/h pounded the camp site all night.

The bleak weather swept into Coromandel where Auckland couple Geraldine Clermont and Mike Kovalo canned their holiday at Tui Lodge a few hours into the new year.

“We opened the tent to take a look and saw two tents were upside down,” Miss Clermont said. “It was really windy, so windy the tent was moving heaps, plus with the rain the upper part blew away and the rest of the structure collapsed.”

Terry Byrne, Manager of the Stony Bay campsite on the Coromandel’s east coast, said they had only 20 hardy souls left.

“We had about 370 before New Year’s Eve. But after we went around and told everyone about the warnings yesterday, they all decided to leave.”

He said the campsite could be tricky in the wet, as it had a ford in the middle which could rise rapidly. At Waikawau, further south, campsite manager Rachael Gaul said they had only half of their 1100 campers remaining by yesterday afternoon.

In Russell, it was a similar story at the Orongo Bay Holiday Park which was half empty yesterday afternoon. The wild weather also saw power cut to 1500 Auckland homes after trees fell on powerlines and some events around the country were cancelled, including part of the 145th annual Waipu Highland Games.

“It was too dangerous to carry on with the heavyweights and, obviously with the athletics, you can’t run in the rain,” organiser Pat Hadlee said.