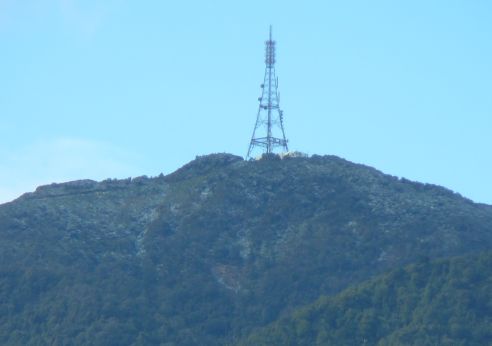 If you’re cold in Auckland today it’s not surprising – the wind is blowing directly off the Kaimai Ranges where last night snow fell to around 800 metres.

Residents in Te Aroha, in the eastern Waikato, woke to find the top of Mt Te Aroha (950m) covered in snow.

As of 12noon it was just 11 degree in parts of Auckland and Whangarei with a feels like temperature only in the mid-single digits.

It was warmer further south in Hamilton on 12 and Tauranga on 13.

The south easterly winds are blustery around East Cape, Coromandel Peninsula, Auckland and Northland as a low to the north east of New Zealand pushes against a large high centred over the South Island.

Frosts will be of concern for orchardists right across the country.

Windy conditions may keep frosts away in the Bay of Plenty however it will be borderline.

The same small front that brought the snow to Mt Te Aroha last night also brought a big thunder and hail storm to Wairarapa.  WeatherWatch.co.nz has just received a new video of the storm arriving, along with yesterday’s hail footage.  Click here to view them both.

Cold airstreams often dry out by the time they reach northern NZ, but obviously not last night.