Snow in parts of Wellington, cold arrives in Auckland 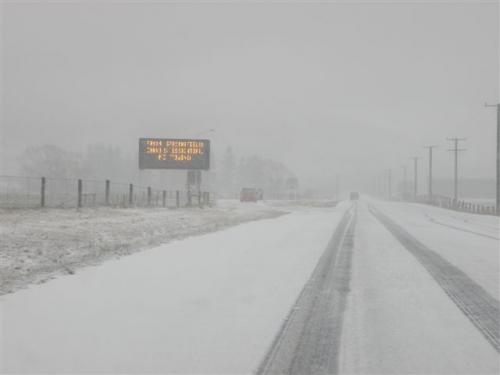 Reports have come in of snow flakes around parts of Wellington.  In both messages sent to WeatherWatch.co.nz and posted at the NZ Weather Forum talk of light snow flakes around the city and in Tawa near Porirua are now coming in.

Temperatures in and around the capital have been extremely low with wind chills down to minus 5.  Hail is also being reported across the city along with winds up to gale force.

The front has reached Napier with temperatures dropping to just 4 degrees and a wind chill around zero to -2.

The air temperature is -1 in Waiouru.

The blue skies across northern New Zealand have now been replaced by thick grey cloud and showers and rain.  Hamilton has just dropped to 7 degrees and head weather analyst Philip Duncan says this band of rain and showers will likely leave a light dusting of snow on the Coromandel Peninsula and Kaimai Ranges.

The colder air has seen the temperature at Auckland airport fall from 12 to 6 degrees in the past 2 hours but more dramatically falling 3 degrees in just a 10 minute window.

The front is moving through Waikato currently and should reach Auckland shortly.

i went outside before and instantly my hands went numb its damn cold out there, i put my foot in a puddle and it was frozen… good ol palmy haha

where did it exactly snow in palmy??

It is very very cold here in the Waitakere region, do you think there’ll be a frost?

The wind is probably a little too strong for a frost…can’t see the temperature falling any further unless the wind dies out.

Sigh, i do love a good frost.
Wish I was in Napier, because I also love the occasional snow.

We have had snow in napier city, not too much where we are because it rained soon after but our friends who live about 2km away didnt get the rain and their trampoline and cars were covered

Just want to let people know that we’ve just had a massive snow shower within the last half an hour here in Newlands.

We’ve had occasional snow/hail shower on & off here all day.

Snow hasn’t settled as yet, however, if we get heavy snow showers tonight it could be a different story!

If I get any good pics I’ll post em up.

Any word on snow on the Kaimais? There’s a group of Auckland Sea Scouts bivouacing in the bush near Katikati – how cold are they getting?

We believe there’s been a dusting possibly down to 7 or 800 metres.  Flurries still possible for another few hours then clearing by midnight.