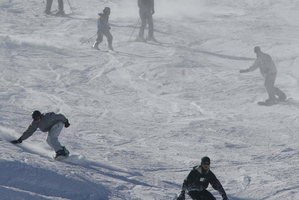 Snow bunnies were out in force around Queenstown on Sunday in what has been described as the best conditions in recent memory.

More than 6000 people tripped to The Remarkables over the weekend, with the combination of Australian and New Zealand school holidays making for a busy day.

Ski area manager Ross Lawerence said despite the amount of people, the quality of the snow and coverage meant there was enough for everybody.

He hadn’t seen conditions this good for at least four years.

The seasons may change, but the beauty is constant! #wakatipbeauty

Mr Lawerence was thankful they had upgraded the base building in time for this season, as the old building wouldn’t have held the current visitor numbers.