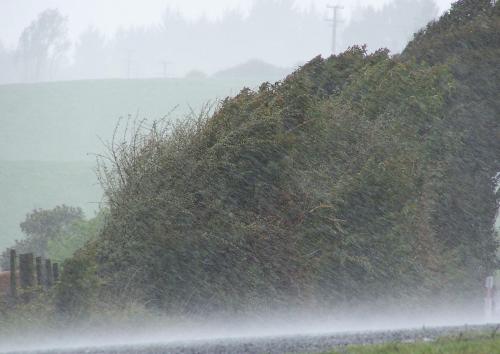 Heavy rain should start to ease fairly quickly from the west today in the North Island but the rain isn’t over yet with the system hooking a narrow but heavy band of rain into the upper South Island.

Most exposed will be the coastline around Kaikoura and further south into Canterbury says WeatherWatch.co.nz.

The government forecaster is also monitoring the situation with a “moderate risk” of rain warnings being issued as late as Friday for Canterbury.

The slow moving nature coupled with the high ranges could create pockets of flooding.

The main fronts will this morning be moving off eastern parts of the North Island but rain may linger about the eastern Bay of Plenty, Gisborne and Hawkes Bay ranges until later this morning or early afternoon.

Winds will ease in most places as the large area of central air pressure – where the pressure gradient flattens out and winds ease – crosses the North Island.

Conditions in the deep south will likely be cloudy and cold today with some light spits of rain possible.  Yesterday Southland and Otago saw a brilliant day with clear skies.

Well, the river is flooded and we can’t get out here in Coatesville. 51.6mm since midnight. Can’t even remember the drought now!

It sure is coming down in Hamilton at 8.00am. Almost dark here.