Sleepless night for Aucklanders as thunder & gales rock on 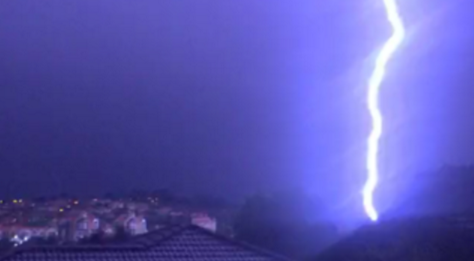 For almost half an hour, thunder and lightning continued non-stop for some central and northern suburbs, WeatherWatch said.

The show raged from about 11.55pm to 12.20am, but come back time and time again in isolated showers – then a more widespread shower at dawn.

“At one stage the lightning count was over 500 recorded around Auckland and out in the eastern Tasman,” the weather analyst added.

Mr Duncan said many members of the public said they’d never experienced continuous thunder and lightning like that before.

“A few expressed their concern at ‘too close for comfort’ forked lightning, including one near-miss to a house in Kaukapakapa,” he said.

“The thunderstorm event could have lasted hours had it not been for a near gale westerly blowing it all along,” Mr Duncan said.

Thunderstorms continued overnight – with another loud burst arriving again at dawn.  All night – and across this morning – winds have also been gusting to gale force, although should gradually ease back today.

Many people on social media this morning are talking of a sleepless night in Waikato and Auckland regions in particular.

Isn’t it finally time to give the public acces to a descent lightning tracker like evrybody else in the world.

I don’t know what storm this story is about but the storm we saw and heard in Auckland, DID last for hours!!!