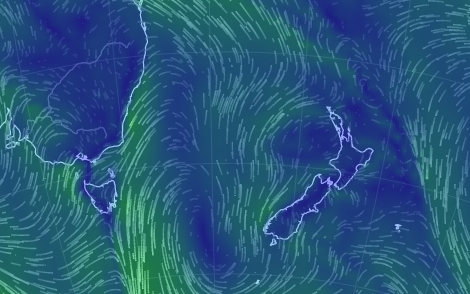 It’s a complicated situation in the skies above us today, as a low pressure system sits over the North Island, a southerly airflow over the South Island, and an anticyclone waiting to the south of the country.

For the lower half of the island, and also the west, it’s looking like periods of cloud interspersed with sun, and southeasterly winds for most of the day. The odd shower will creep in from afternoon for many places (see regional forecast) and there is a possibility of hail about Taranaki, the Central North Island, Manawatu and southern Waikato. There could be thunder in those heavy showers, but it should ease towards evening.

In Wellington and along the East Coast, it’s looking like showers for most of the day, with rain from afternoon about the Wairarapa and Hawke’s Bay. Gisborne will start dry in the morning before showers move in towards the afternoon.

And, for the West Coast, it’s looking sunny-ish, though it’s looking like isolated showers and a chance of some hail about the ranges in the afternoon.