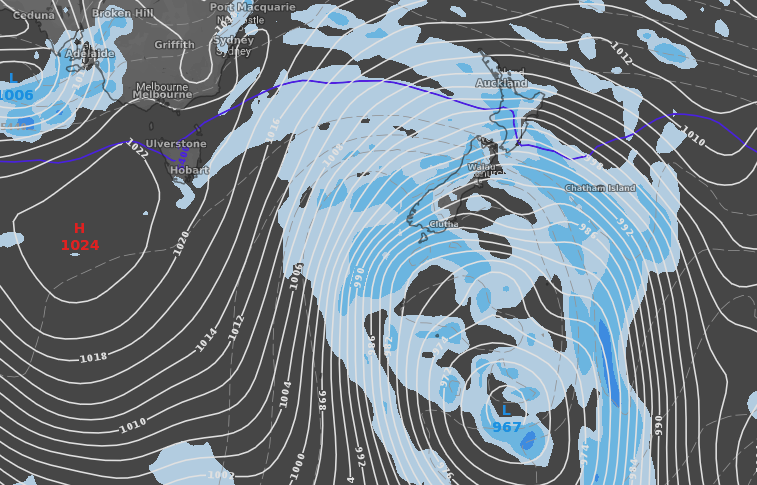 WeatherWatch.co.nz is warning farmers in the lower South Island to be prepared for a late winter storm next week as a polar southerly direct from Antarctic roars up towards New Zealand.

“This looks to be one of the more significant southerlies of 2018, at least for the lower part of New Zealand” says WeatherWatch.co.nz head forecaster Philip Duncan.

Most exposed will be Southland and Otago with WeatherWatch.co.nz saying snow flurries may settle down to 200m and perhaps even go further towards sea level in isolated flurries. One positive is that with such a mild winter and start to spring the soil temperatures are fairly mild, this will help melt the snow faster at lower levels and mean it’s unlikely to linger long – especially with milder weather returning by next weekend.

Generally speaking next week sees a mix of rain, snow, rain showers and strong, cold, winds from the WSW, SW and SSW. Snow is quite possible in Queenstown, Wanaka, Lumsden and potentially Dunedin’s hilltop suburbs although Dunedin may be much drier due to more of a westerly lean to the winds there. Dunedin is yet to be locked in.

Main concern is for farmers with newborn stock. “Daytime highs will be miserable along with wintry, damp, southerlies. Whether it’s snow flurries or just wintry rain showers the reality is that this will be a miserable week for livestock in the lower South Island, especially newborn lambs with daytime highs next Wednesday ranging from just +3 to +9C degrees there”.

“Snow storms in September and October and incredibly normal” says Mr Duncan “but the timing is extremely poor for growers and farmers. The equinox is this Sunday which means no matter how you slice it and dice it, next week is officially spring – but winter is reminding us it has only just come to an end and summer is still a few months away. We must stay on our toes for another month at least”.

WeatherWatch.co.nz has more details in our weather video out by noon Thursday and we’ll keep you posted in our NEWS tab here at WeatherWatch.co.nz and in the news section in our free weather App over the coming days/week.

– Wednesday next week shows a southerly directly from Antarctica