Significant North Island rain could be more than a week away 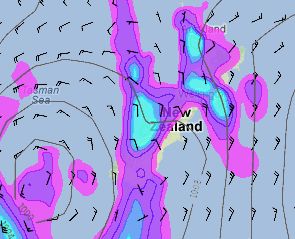 A few showers here and there aren’t going to help.  WeatherWatch.co.nz forecasters think it will be several more days before any widespread, significant rain will fall on the North Island.

Especially hard it are Auckland, parts of Waikato and Hawkes Bay where they’ve seen just 10 percent of January’s normal rainfall.

WeatherWatch.co.nz Forecaster Howard Joseph says the models are painting a very dry picture for the upcoming week with a ridge of high pressure centred over the country.

“There is a chance that a few showers will wander onto the northern tip of the North Island on Thursday.  But chances are small and amounts will be light.  We need a more widespread, significant rainfall,” said Mr Joseph

The chance for that happening looks to be more than a week away.

Mr Joseph says a rather potent low is expected to form just east of Tasmania on Saturday the 2nd.  This low would then track east and expand in size, but it would also weaken.

That weakening is actually good news for those hoping for rain.

“That simply means the low has a better chance to bring more widespread rain to more parts of the country,” said Mr Joseph

That low could start to affect parts of the North Island as early as Sunday the 3rd with a better chance for more widespread rain on the following Monday and Tuesday.  Rain chances on the North Island may even linger into Wednesday the 6th.

Meanwhile, full and partial fire bans remain in place in many districts around the country including Auckland’s first ever region-wide fire ban.  This ban also extends to Great Barrier, Kawau, Waiheke and the Hauraki Gulf Islands.

What about the deepening tropical low south of New Caledonia/Fiji, that the metservice says will be around by monday?

Dry as can be in rural Tauranga, only 11mm so far this month!