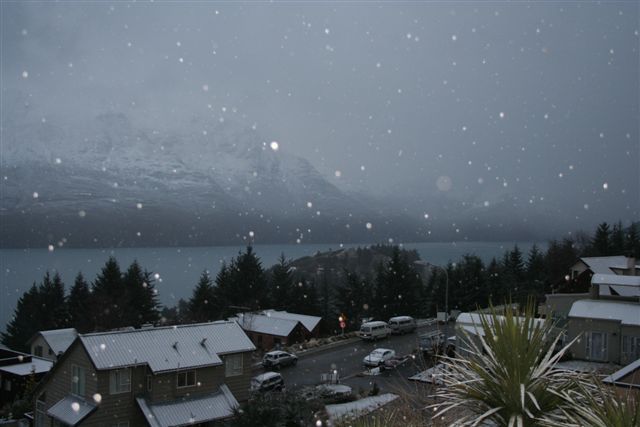 And just when you thought Winter ’11 was over, it’s coming back to bite us in the…well, south.

WeatherWatch.co.nz has today confirmed a likely cold snap at the end of the working week for those in the lower South Island.  The predicted short, sharp, cold snap could bring snow flurries back into Queenstown and sleet into Invercargill.

Snow may affect some high altitude highways too, south of Canterbury.

While not a regular occurrence, November cold snaps are simply part of spring weather as the winter cold slowly departs.

This southerly change is on the tail of a hot blast that has spread across the South Island in recent days.  The lower South Island has dominated New Zealand’s national highs lately with Dunedin hitting a rare 27 degrees for the last day of October yesterday.  On Sunday Blenheim had 25 and on Saturday Alexandra also had 25.

Numerous South Island centres were warm to hot yesterday including Christchurch which reached 26 and Oamaru and Ashburton on 25.

WeatherWatch.co.nz says the cold blast shouldn’t be long lasting enough to cause serious worries for farmers but advises them to be prepared none the less.

Daytime highs in some parts of Southland and Otago may not reached double digits on Friday and Saturday says WeatherWatch.co.nz.

But the cold snap will be short lived with warm winds returning by Sunday or Monday.

the tour of siuthland is on its bound to be awful weather it seems to happen more often than not.

Yes you hardly need a weather forecaster to tell you that the weather will turn cold when the Tour of Southland is on – it seems to be jinxed!  Oh well, makes for more of a challenge 🙂

Snow for Dunedin in this one??

Hi Paul – think the wind might be a bit too westerly to deliver snow. Sleet may be possible on the hilltop suburbs, but snow isn’t predicted by us at this stage.  Feel free to ask again on Thursday when we have a much clearer picture but at this stage we don’t expect snow.

Those poor souls in the US Northeast must be saying the same thing ha.

Hi David – yes certainly an easy target to attack Global Warming!  But actually a warmer globe means more snow storms oddly enough – and earlier snow storms too!  The warmer the earth gets the more moisture there is in some areas – like the US – which turns to snow as we head into the colder seasons.

Maybe, but that does not account for the colder temperatures.