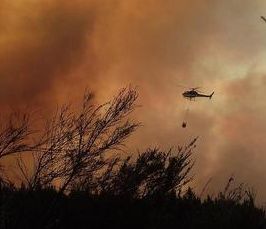 Fire crews say it’s too early to tell what caused a major fire near Foxton in Manawatu this afternoon, which threatened houses and a pine plantation.

Firefighters from as far afield as Palmerston North and Levin battled the blaze for around two hours and are now dampening down the hot spots.

A Palmerston North Fire spokesman says homes near Union and Brown streets were considered threatened around 1.30pm, but the fire was contained before the risk eventuated.

This is the second largest bush fire in days says WeatherWatch.co.nz.

A forest fire that started Thursday afternoon was finally extinguished yesterday in the Poutu Forest, Northland.

WeatherWatch.co.nz reader Rachel Kuljish took these exclusive photos at the height of the blaze.

There was a bush/scrub fire here in Kaukapakapa today 7 fire truck attended. Even the Hazmat truck and a soil&rock consultant! And now they want to charge the person who called in the fire with the fee’s!

I’m astounded at the stupidity of some people who live rural, we had to tell our neighbour only last week there is a fire ban after he lit an 44 gallon drum incinerator, we are so low on water that a grass fire would take hold and engulf our property before the fire crews could get here with the tanker. Any hint of smoke this time of year makes my blood run cold.