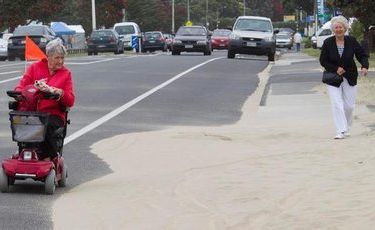 The Hibiscus Coast Highway has looked like a beach track in parts of Orewa as high winds blasted sand dunes, sending clouds of grit to cover homes and gardens up to 200m inland.

Yesterday, along the 3km Orewa Beach, picnic parties huddled behind vehicles to shelter from the sand storm while on the beach, pilots of sand yachts were thrilled at being able to reach speeds of 60 km/h.

The lawn at the beach’s playground was also clogged with the sand, which had built up to knee-height on the pathways above the beach.

At the town’s BP service station on Sunday, motorists were pelted with grit whipped up from drifts spread over the highway.

“It is unbelievable,” said beachfront resident Brett Proctor. “I’ve seen high winds in my five years here, but nothing as … continuous as this.”

His garden, six steps up from the beach, had been buried in sand and he was constantly washing a golden crust off his cars.

Mr Proctor said the wind-blown sand came from heaps recently dumped at the foot of the esplanade by Auckland Council to replace a wave barrier of boulders.

“It seems that sand was put there too early in the summer because the north-easterly winds have not finished yet.”

However, she said the wind had helped to rejuvenate the dunes by piling up the sand which the rain would now bed down.

At the Orewa Beach Surf Life Saving Club’s rooms, Zane Taylor said the sand storm showed that the traditional redistributing of sand around the beach by machinery did not work.

He is the chairman of a trust which is seeking resource consent to form an artificial reef as a sustainable method to stop the sand being washed away.

Sand levels needed to be kept in order to give a wider dry section for walking, a buffer from the full force of stormy seas and establish a stable foredune.

“If you had a dune system in place with grasses planted on it, they would catch wind-blown sand and it would drop.

Redistributing the sand from one part of the beach to the other costs the council up to $70,000 a time.

– Homepage image / Joan Chadwick (on scooter) and Hilda Pearson negotiate the sand that was blown up from Orewa Beach on to the main street on Sunday. Photo / Paul Estcourt