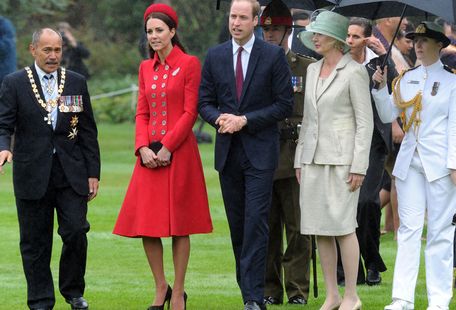 The Duke and Duchess of Cambridge were warmly greeted by dignitaries and fans who lined the streets as a cold, wintry blast blew across the capital today.

They arrived about 20 minutes late due to heavy fog that had settled over Wellington.

They were be met by the Governor-General’s Aide-de-Camp Commander Richard Walker, Prime Minister John Key, his wife Bronagh, and Wellington Mayor Celia Wade-Brown.

The royal couple looked happy and relaxed, despite the fog and drizzle, as they disembarked the plane and met dignitaries.

Their arrival was met with cheers from hardy members of the public who had gathered near the security fence outside the military terminal.

The couple spent less than two minutes on the tarmac before being guided to their limousine.

Kate was wearing a Catherine Walker scarlet coat, a matching Gina Foster hat, and a brooch in the shape of a silver fern which was gifted to the Queen on her 1952-53 tour of New Zealand.

Rain and a southerly wind greeted the royal couple as they arrived at Government House in Wellington about 12.45pm.

The Defence Force Kapa Haka group performed a traditional welcome, laying a leaf on the ground for Prince William to collect.

The couple was briefed on protocol and relevance of the Maori greeting by Kaumatua Lewis Moeau and Kuia Hiria Hape.

Rongotai College pupils then performed a haka for the couple, who then spoke with the group’s leaders, Conor Flynn and Luka Hogervorst.

A 21-gun salute echoed around the area, as the band played God Save the Queen and New Zealand’s national anthem.

Prince William took time to inspect the Guard of Honour.

The persistent rain resulted in the royals needing to be sheltered under umbrellas, but it did not stop them from meeting local school children from Clyde Quay School, Muritai School and Petone Central School.

Some children gave Catherine flowers and letters they had written.

After about half an hour after arriving, the ceremony ended and Prince William and his wife were ushered into Government House.

Tomorrow, the couple have a rest day before starting their tour of the country, visiting Blenheim, Auckland, Hamilton, Dunedin, Queenstown and Christchurch.

Crowds hoping to catch a glimpse of the Prince William and his family gathered on Wellington’s Oriental parade.

Following the passing of the Royal motorcade, Holly Bradshaw, 20, said she was surprised by how quickly they passed.

“I first saw Will wave and then I saw Kate and she looked beautiful in the red dress.”

Ms Bradshaw said she waited an hour to catch a glimpse of the passing motorcade.

Jono Selbadurai, 23, said he felt that he made eye contact with the Duchess.

“There was a little moment there, but it was pretty fast. It was over like that. I look forward to seeing them again. Kate looked great.”

Foul weather didn’t put off the royal-watchers, many of whom were waving Union Jack flags.

Wellington resident Alexandra Allen had wrapped up in her raincoat for the occasion.

Her friend, Hannah Harding had brought her two young sons along for the occasion.

“I”m interested in seeing how many cars the [motorcade] has,” she said.

Wellington’s High Five Early Education centre is set to give a hearty Kiwi welcome to the Duke and Duchess of Cambridge.

The preschool, situated on Evans Bay Parade, is along the route the royal motorcade will take from Wellington Airport to Government House.