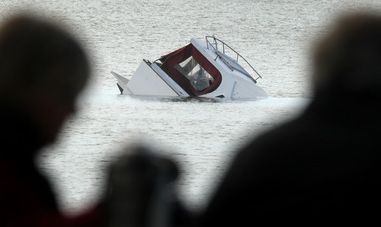 A $75,000 launch fell victim to the high seas and rough winds which hammered the Bay of Plenty on Monday night.

Only a small part of the 10.6m launch was visible yesterday above the surface of Tauranga Harbour near Omokoroa.

The Fire Service responded to almost 20 calls in the Bay of Plenty over weather-related issues during the night. Many of them involved flooded houses.

A large low which settled over New Zealand yesterday is to blame for the destruction, and forecasters say the miserable weather will be sticking around for the rest of the week before dying out on Sunday and Monday.

Image / Only the top of the 10.6m launch was visible after the sinking. Photo / Alan Gibson