Risk of thunder down south 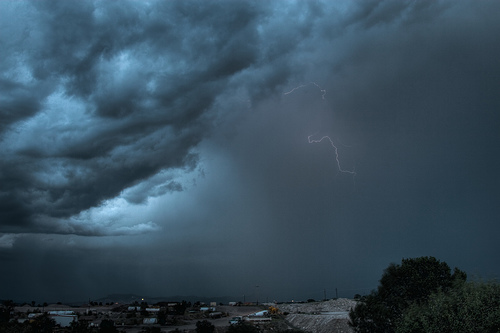 A chance of thunderstorms remains for eastern areas of the South Island today with the focus being over parts of Canterbury and Otago.

Inland areas of the North Island also may see some heavy showers later today but they should be mostly isolated and about higher ground.

Daytime heating is needed to form thunderstorms and after Cantabs have struggled to see much warmth in recent days, this will need to be a key ingredient with a nor’ easter building up over the plains today.

Recently the Government forecaster issued a severe weather outlook with a chance of a tornado as far north as Waipara in North Canterbury but nothing eventuated howvere some heavy showers fell over North Otago and South Canterbury.

Today the set up does look a little more promising and mid to late Spring is often the time when thunderstorms can result over the plains however the right conditions are vital. Presently there’s about a 30% chance.

There’s been a lack of thunderstorms so far in southern areas this season but for an example Christchurch only averages a couple of thunderstorms a year and often November and December are the months when they occur. The situation at this stage today appears to be south of the Garden city and perhaps closer to South Canterbury and North Otago with a small risk for Dunedin and Christchurch.

What kind of season we have, the ideal season is to have more S-SW cold flows coming up the south island with a stubborn high in the Tasman and running into onshore NE winds.
Most years its remained more westerly meaning the east coast has been generally drier and fewer storms have ocurred.
The period of 1998-2004 was a good example of a good season with up to 7-8 storm days between mid november and mid january, in 2004 around xmas we had 3 days in a row of thunderstorms in christchurch and canterbury.
So heres hoping for a better season this time, ( this coming from a chaser ) 😉