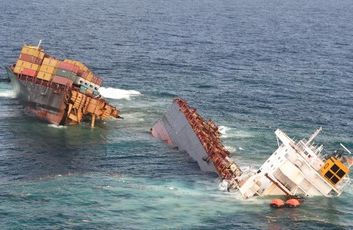 More oil has leaked from the stricken container ship Rena and is expected to wash up on Coromandel Peninsula beaches today.

Swells up to 7m high battered the ship yesterday and throughout the night, and a light oil sheen has been spotted around the Rena, which has been stranded on Tauranga’s Astrolabe reef since October last year.

At least 10 containers are also believed to have fallen off the ship.

The rough seas were expected to break up the oil, but there still may be some which washes ashore.

“We know we’ve got pockets of different sorts of oil on board this ship so that is slowly going to leak out as it has done over previous months, especially with the rough weather that causes that release of oil and people should be aware that there could be more sprinkling of oil on the beaches.”

He said the amounts of oil were “relatively small” and were not going to have the ecological effects of previous spills from the container ship.

Only tens of tonnes remain on the vessel.

Mr Henderson said MNZ has not been able to get out to check on the vessel due to the conditions but will do once the seas are calm.

“The plan today is to get a plane up later today, and we’ll be hearing from salvors too to see if there has been any further damage to the vessel.”

There is something black at the high tide mark at Whangapoua, mainly at the northern end of the beach….could be some iron sand disturbed by the storm or it could be oil?