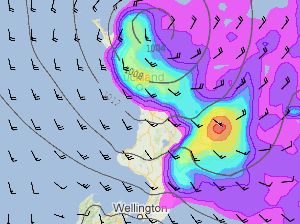 The remnants of Evan still appear headed for a Christmas Eve rendezvous with the North Island, with the effects being felt as early as Saturday in the northern and eastern areas.

By the time things wind down on Tuesday, just about every part of the North Island will have felt at least some effect from Evan.

Here’s how things break down, based on the current model data;

First, as of this morning, Evan is no longer a tropical cyclone.  However, it is still a potent low packed with moisture and enough energy generate some strong winds.

WeatherWatch.co.nz Forecaster Howard Joseph says by Saturday evening, the Coromandel Peninsula, Bay of Plenty, East Cape and Gisborne should all be seeing rain.  Some of it could be heavy at times.  Winds will also be picking up in strength and could near gale force.  Mr Joseph says “Severe gale force winds do not appear to be likely, but the threat can’t be completely ruled out.”

Evan looks more of a rain event for NZ.

As the remnants of Evan gets closer, more rain is expected for the Coromandel Peninsula, Bay of Plenty, East Cape and Gisborne on Sunday.  There is a good possibility for heavy rain for the East Cape and Gisborne Sunday evening.  Moderate to strong winds are expected for the eastern North Island from Gisborne, north to the upper tip of the island.  Winds could again approach gale force.

Rain is also expected to fall on Hawke’s Bay, Auckland and Waikato on Sunday.

On Monday morning, the centre of the low is expected to move west across the tip of the North Island.  Rain, some possibly heavy, and moderate to strong winds will likely affect most of the North Island.  Most of the rain will affect the northern half of the island.  The strong winds will likely affect Northland and Auckland.  There is a pretty good chance for winds to approach gale force.  Severe gales are possible but only a low risk.

On Christmas Day, the low will continue its slow westward track out over the Tasman Sea as it continues to unravel and fall apart  Expect a showery day for most of the North Island and possibly even the upper South Island with windy conditions for some too.

Mr Joseph cautions that there is still a chance that low could end up taking a different track, in which case the wind and rain forecasts will need to be adjusted.  But he adds that WeatherWatch.co.nz will continue to keep a close eye on the remnants of Evan and will provide updates as conditions warrant.

I have been following this sutation of hurricane evan , and this is the recent article i found on stuff , i guess a bit of danger still is there but the weather people i guess are not speaking of it . I wonder what philip duncan would say to this – http://www.stuff.co.nz/dominion-post/news/8102736/Cyclone-Evan-on-course-to-hit-NZ .

Hi there – read that and shook my head. This has been in the models for over 10 days, and for some 2 weeks. This past Monday we had a 90% risk of Evan reaching NZ – I’ve never had that high level of confidence for a tropical low 7 days out.

The question to us was always this one – how severe will Evan be when he reaches NZ?  As we know he is weakening and we knew northern NZ was vulnerable. Even today we still aren’t sure about rainfall totals and regions most exposed – but certainly one to monitor.

It’s disappointing MetService see protecting their commercial interests as more important than working with us around severe weather events.  As always the offer is there to work together proactively in the interests of public safety.

Hi im travelling home for the holiday period from Europe, i was wondering why your extended forecast and expected temperatures are so different from metservice. Maximums expected in Auckland and Gisborne differ around 5 degrees at times? With your site being alot cooler.

Hi Brett, our temps may go up – it’s all to do with cloud cover.  Thick clouds will keep highs in the low to mid 20s, clearing skies will see them hit late 20s/early 30s.  Every forecast is changing with each update – as is often the case with tropical lows, as they had huge amounts of uncertainty to the forecasts.

Please also note with the exception of Auckland, Hamilton and Christchurch, all our other forecasts are computer generated by MetOcean, not us.  We are rolling our more forecasts next year, but receive no government funding so we have to raise the money first.

They’ve flip flopped on this one a number of times.  At the end of the day we’ll never be 100% sure.  M/S never predicted any risk of tornado until AFTER it happened, so perhaps not surprising they aren’t too keen to ‘lock in’ the tornado explanation as it proves they didn’t warn of it.  Neither side can prove each other right or wrong on this one.

maybe we’ll know by the end of the year or next….

Does this mean Northland more likely to get wind rather than rain. And is this weather likely to stall over the weekend if the high south of here builds.

Hi Glenda – quite possibly – Monday could be a wet and windy day for you, but compared to other ex-cyclones this one will hopefully be a non-event for Northland.  One to cloely monitor though, in case anything changes.