Home > News > Remnants of Evan remains on schedule for...

Remnants of Evan remains on schedule for Monday arrival 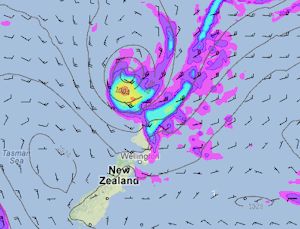 The low that used to be Tropical Cyclone Evan is still on track to bring wind and rain to the North Island as it gets ready to cross Northland on Monday.

Before that happens though, another low is expected to come at the North Island from the south.  This will likely spread precipitation across parts of the lower and central North Island on Saturday.  Wairarapa, Hawkes Bay and Waikato have the best chance of seeing showers.

On Sunday, the first wave of rain arrives on the North Island.  This will affect primarily East Cape and Gisborne during the day.  During the afternoon, rain should begin to spread across the Bay of Plenty.  By evening, we will see precipitation chances over most of the North Island with most of it falling over the upper and eastern North Island.

On Monday, the centre of the low is expected to move across Northland.  During the overnight hours on Sunday into early Monday, we will see winds sharply increase about Northland.  Gale force winds are likely.  However the chance for widespread severe gales is not very good.  That means the chance for widespread wind damage is also fairly low.  The winds will ease during the afternoon.

Rain will also be increasing for Northland on Monday.  Heavy rain is likely during the morning and early afternoon.  However, chances are small that this rain will be heavy enough to warrant the issuance of warnings by Government forecaster MetService.

Rain is also expected for the eastern North Island.  Heavy rain is possible for Bay of Plenty and East Cape.

Lingering energy and moisture is likely to keep rain chances in place for much of the North Island for Christmas Day.