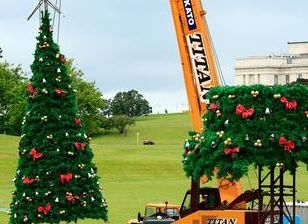 The publicity associated with the annual Christmas in the Park extravaganza claims, among other things, that it performs to “the largest audience of its kind in the world”. Over the years, reports, both before and afterwards, regularly speak of crowds of 200,000 to 250,000 turning up – the equivalent of one in every five or six people living between Wellsford and Pukekohe.

Not to be outdone, organisers of Auckland City’s annual Santa Parade – the latest two Sundays ago – go 50,000 better, and annually say their show attracts audiences of at least 300,000.

The idea of a fifth of all Aucklanders squeezing themselves into either the Domain or Queen St at once, and not dying in the crush or bringing the transport system to a halt, has always seemed a most unlikely scenario to me. Now, investigations by professional mathematician and quantitative analyst Tony Cooper highlight how exaggerated the claims are.

Mr Cooper, managing director of research company Double-Digit Numerics, sat down after attending the recent Santa Parade with a pile of photographs and his measuring tools, and calculated that the true size of the crowd was around 30,000, or 10 times smaller than the generally accepted myth of 300,000.

His first move was pretty basic. He measured the length of the parade route and, using simple arithmetic, showed “there simply isn’t enough room on the parade route to squeeze in 300,000 people”.

The parade route around Queen St, Customs St and Albert St is 2270 metres long. Customs St is 33m wide and the other two 26m.

That “gives us 60,000 square metres maximum road and footpath area to fit people”.

Mr Cooper then removed 60 per cent of this area to provide room for the parade, leaving 24,000sq m.

“To fit 300,000 people into this space they would have to be squished in at a rate of 12.5 people per square metre. That’s virtually impossible.” He says even squeezing four people into a square measuring one metre by one metre “is pretty uncomfortable”.

He then used the “Jacobs method” of crowd calculations, based on work by journalist turned academic Herbert Jacobs, who in the late 1960s, created a way of estimating the size of anti-Vietnam War protest crowds.

Adapting the Jacobs formula, Mr Cooper worked on the basis that two people a square metre are tightly packed.

“So if the whole parade route were packed, then there would have been, at most, 48,000 people. But the route wasn’t packed. There were stretches on Albert St where there were no people. Even the densest areas on Customs St had room for walking and even more people.”

With the aid of photos he took around the route, he worked out the average crowd density at various points, and came up with a crowd size of 30,000.

He says it would be harder to sample crowd density at the Domain concerts, but says numbers are greatly over-reported there as well. He suggests 30,000 to 50,000 would be a better estimate. In other words, a big, Eden Park-sized crowd. (Full report here.)

Of course crowd size is all about public relations, and attracting sponsors, so talking up the numbers can be important.

For years, Auckland Museum proudly bragged it had more than a million visitors a year. Then in 1999 it introduced turnstiles and the awful compulsory “donation”. After 18 months, it emerged that “donors” – in other words, visitors – were fewer than 200,000. In 2007, there were claims that visitor numbers were 600,000, but last year the museum was admitting to a total of 245,000.

Like the museum, these big free shows love to skite about the size of their crowds because it encourages sponsors. On the other hand, you have to wonder what effect the idea of joining a mob of 200,000 has on audience numbers. Might it not be turning off families, unwilling to face the thought of joining a fifth of Auckland’s population on the move.

Homepage image : Christmas tree nearly 20m tall is assembled and lifted into place by a crane in the Auckland Domain. Photo / Martin Sykes