Ready for some GOOD news? 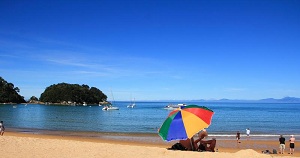 There is some nice weather on the way, believe it or not.  Depending on where you are in the country, you may see it before New Year’s Day.

The South Island should start to clear out nicely by Saturday.  Some spotty showers are possible in the Nelson area and northern Marlborough in the early morning hours.  But by afternoon, the whole island should be enjoying settled weather.  Temperatures should be very summer like in central Otago with highs pushing into the mid 20s.  On the other end of the spectrum, cooler temps should settle in across Canterbury with daytime highs right around 20 and maybe even a few teens.  Sunday is looking just as nice as Saturday.  So, a very nice start to 2012 for the South Island.

Monday could bring a few showers to Canterbury, Tasman and Nelson.  Combine that with a good dose of clouds and you are looking at a slightly cooler day for most of the island.  But dry weather and warm temperatures return on Tuesday and stay for Wednesday.  The next chance for rain for the South Island moves in on Thursday and could stay through Friday.

For the North Island, the news is not so good.  Not for this weekend anyway.  Rain, some of it heavy, will continue to fall on much of the North Island right through Sunday.  On Monday, the rain won’t be quite as widespread.  By Tuesday, just a few scattered showers are expected in the Hawkes Bay area and Northland during the early morning.  After that, the weather should settle for Tuesday and stay settled through Thursday.

Temperatures for the North Island aren’t going to be quite as warm as what we will see in the south.  Daytime highs should be around 20 for much of next week.

Unfortunately, it looks like rain chances come back into the forecast just in time for next weekend.  But that’s over a week away yet.  Lots could change between now and then.

What strength will the wind be over the weekend please? We are supposed to be organising a fishing competition at Vivian Bay, Kawau Island.