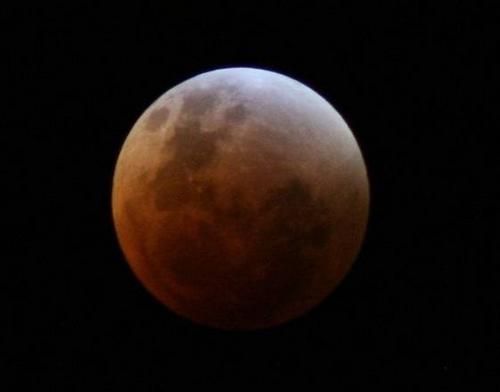 A copper-tinged moon will be visible early tomorrow morning as New Zealand gets the box seat for a rare lunar eclipse.

The hour-long total blocking of the view of the moon will begin around 3am and will be seen from all of New Zealand if the skies are clear.

Stardome Observatory educator David Britten said the moon was likely to take on a copper hue in the early hours of tomorrow morning.

“This is caused by a scattering of sunlight as it passes through the thin ring of the Earth’s atmosphere, removing the blue light and passing mainly the red, some of which weakly illuminates the moon.”

In a lunar eclipse, the moon is obscured as it passes through the Earth’s shadow. Two shadows will cross the moon during the event – the large penumbra (or “almost-shadow”), which dims the moon, and the umbra, a smaller opaque shadow caused by the Earth blocking out the light from the sun to the moon.

Mr Britten recommended that people begin observing the moon at 2.30am at the latest.

After that it could be difficult to spot in the night sky.

“You’re going to get a better view the darker the site you’re looking from, rather than dodging around streetlights.”

The further north in New Zealand, the better the vantage point, because the earlier sunrise in the South Island would obscure the eclipse.

A total lunar eclipse occurs around two or three times a year, but is often cut short by the moon setting.

The event is rare because the moon is usually above or below the plane of the Earth’s orbit.

Mr Britten said there would be no total eclipses in 2012.

When and where to watch

12.33am: First contact with penumbra (part shadow begins to creep across the moon).

1.46am: First contact with umbra (full shadow begins to cross the moon).

* The further north in New Zealand you are, the better.

* A view over water, away from lights, is best.

* The eclipse will be visible to the naked eye, but astronomical societies will host viewings.

* In Auckland, Stardome Observ-atory will be open from midnight to 6am (gold coin donation).

WEATHER:   Weather conditions over many parts of New Zealand may be cloudy tonight – check out our animated satellite map on our maps page here

I’m nkw sitting outside with a blanketblookingnat a cloudless sky with a beautiful red moon. All the stars are out as well, including one ‘falling star’. It’s really magical, wonderful! 🙂

Beautiful image by Rew, I remember the last eclipse, it was a beautiful clear night. Am hoping these clouds blow away fast!