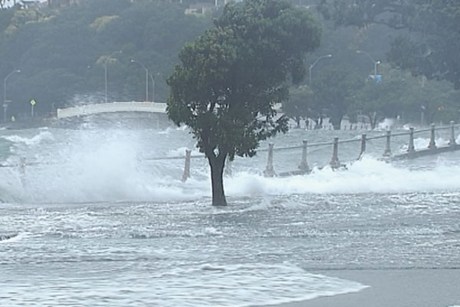 Today and the weekend is looking largely scrappy weather-wise as an incoming low brings plenty of cloud with bursts of rain or showers but also patchy drizzle and dry spells. Glimpses of sunshine are also expected but it appears not for many hours on end.

This whole event could last a few days but prolonged rain and blustery winds don’t appear to be the biggest feature.

Once this system eventually moves through there’s another low lurking in the wings over central parts of the Tasman sea and seems to take aim at the North Island next week so unsettled skies look possible over the next week or so.

A west to sou’ west flow by the end of next week which also contain a couple of fronts should see much of the country with bands of rain or showers from time to time.

It is a messy looking picture up until the end of the month and for the first time in many months the next two weeks hardly sees an anticyclone in sight.

“This is something we haven’t seen much of so far in 2013″ says weather analyst Richard Green.”A series of depressions and fronts being the biggest feature of our weather and even though there’ll still be dry spells as well it’s looking fairly soggy for parts of the country over the next 10-14 days”.

WeatherWatch believes even though the current weather scenario in the medium term could change it appears the power the anticyclones once had over us have lost their oomph which is allowing other players in.

It’s taken until the eve of Winter for this to take shape and at least it’s providing some moisture but if it had fallen three or four months ago it would have been far more useful.

Temperatures during the weekend should see a cooling trend for central and southern areas as southerlies start to slowly wind up in places and next week little warmth is expected over much of the east and south of the South Island.

Rain guages have been well used over the last month and the next week or two seems to show regular top ups could be on the way especially over western and northern regions.