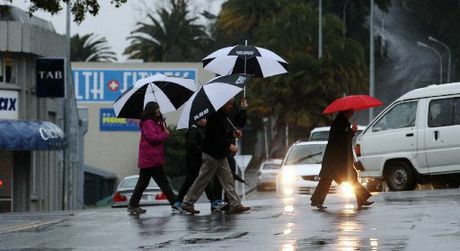 As we mentioned in an earlier story patchy showers fell across parts of the North Island however in some cases it wasn’t enough to totally wet the ground.

The main feature today is eastern parts of the North Island where showers could last thoughout much of the day and even a few of the showers earlier were moderately heavy.

Elsewhere though any light, isolated showers lingering will clear away fairly smartly and mostly sunny skies is also another feature of Tuesday.

As another front heads towards the south tomorrow, rain is set to move over parts of Westand and Fiordland and as the front flicks through there’s a risk of a couple of showers across parts of coastal Southland, Otago and Canterbury.

Thursday and Friday sees a high settle over us but a weak front brushes the south later on Friday and early Saturday with some cloud and again a risk of a shower to those regions mentioned previously.

The weekend is mostly sunny and dry for most areas and Sunday especially.

Next week sees a few showers develop over inland areas of the South Island but a mostly dry week is set for Aotearoa due to a ridge of high pressure refusing to budge.

The following weekend still has some rain likely over eastern areas of the Mainland and early the following week on the 18th the overall picture sees more disturbances surrounding the country with the chance of rain-bearing systems encroaching onto our shores.

I’m at Waihi beach & we had rain for about 3 hours on Tuesday – quite ‘thick’ rain, wonder if anyone danced in it as its really the first rain since 29 December
& today we have had an early morning shower, hopefully get some more

Thought we were going to get some last night, the clouds were heavy and a few drops did come through but nothing to wet the ground.

Back to the clear blue and sunshine in Lyall Bay today after some morning cloud.

Thanks Joe and sorry to hear of the tiny amount.

Yay! We are having a nice sprinkling of rain in Papamoa at the moment.

Nothing significant – enough to wet the foliage but not enough to saturate the earth.

It is so nice to feel cool and have some wet stuff on the ground!

Must be making a pleasant change!

thanks for letting us know