A front pushes off the top of the South Island this morning then onto the lower North Island, this front clears the upper North Island by evening. A strong northwesterly airflow changes westerly once the front moves through. The rest of South Island meanwhile has a strong westerly airflow that then changes colder southwest during the afternoon and evening especially along the east coast bringing unstable conditions.

Rain develops late morning or around midday for the upper North Island then eases in the afternoon (perhaps even clearing) as gusty northwesterly winds change southwest.

Rain for the lower North Island in the west from early morning, rain may be heavy at times then clears around midday as strong to gale northwesterly winds change westerly. A few showers then return in the evening. The east coast is mainly dry to start then mid to late morning a westerly change moves through the Wairarapa bringing showers, the odd spot of rain further north during the afternoon as this change moves through.

Early heavy rain for North Westland eases to showers. Nelson and Marlborough (especially in the west) sees morning heavy rain clear, there may be some further rain move into Marlborough later in the evening.

Canterbury sees any early spots of rain clear. Late afternoon / early evening a southwest change moves through bringing showers, some of which may be heavy with thunderstorms and hail (especially inland). These showers clear overnight.

Otago and Southland sees rain in the morning with the odd heavy fall then easing to showers in the afternoon. 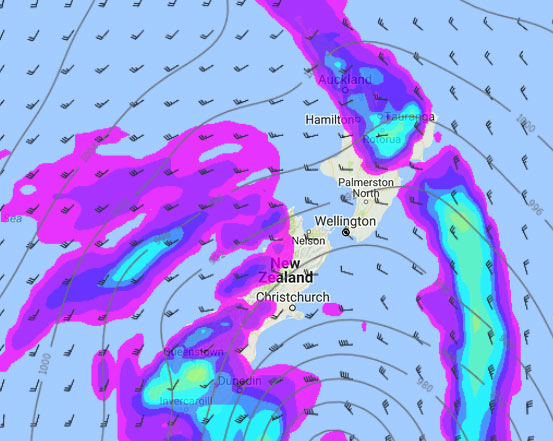