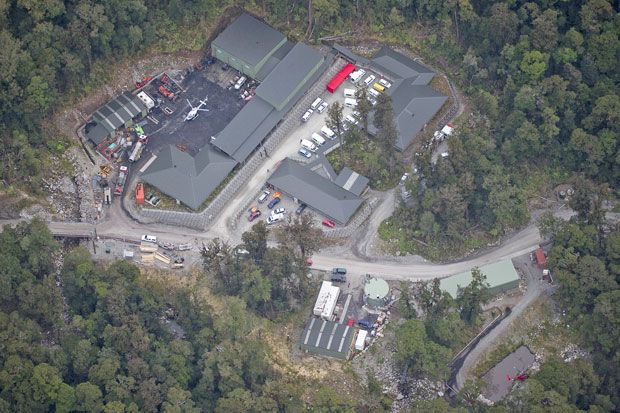 Auckland, New Zealand — Low cloud and rain are continuing to move into the West Coast of New Zealand’s South Island which may cause some problems flying in and out of the area.

However WeatherWatch.co.nz says the latest information to hand shows that the light rain currently falling in the area will clear during this afternoon.

Helicopters have been flying over all morning but cannot land at the entrance to the mine because of the thick cloud.

The West Coast is a long, narrow, region on the western side of the Southern Alps – a large chain of mountains that run the length of the island and climb to a height of over 3700 metres (12,300 ft).  If any miners do need urgent medical attention they will need to be flown to either Christchurch, Wellington or Dunedin, both routes would take pilots over the Southern Alps.

On Sunday sunnier skies will set in as a large high moves in – with dry, mostly sunny, weather expected on the West Coast well into next week.

As of 11am there were still 29 miners trapped and it’s unknown if they need medical attention.

WeatherWatch.co.nz says that cloudy skies, which may make helicopter trips over the Southern Alps difficult, should also clear towards evening.

Weather conditions for flights in and out of the West Coast look favourable for the next few days with only a few showers in the forecast about the Southern Alps tomorrow for a time.