Rain measured on a cellphone? 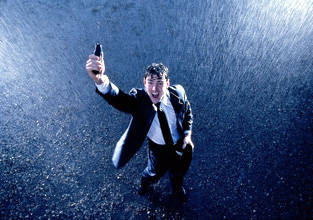 It may seem out of this world but a simple handheld cellphone could be the next step in measuring amounts of rain.

So could it be out with the old rain guages and in with new phone devices?

It has been tested using mobile phone network signals which have been put into practice across a whole country.

Rain absorbs and scatters mobile phone signals in a way that can be analysed to yield an overall rainfall picture.

The trial in the Netherlands, outlined in Proceedings of the National Academy of Sciences, showed the method is comparable to radar and rain gauges.

But it can be put to use in the many regions where radar is not installed, or where rain gauges are in decline.High-quality precipitation data are needed for accurate flood warnings, or to effectively manage local water resources.

Yet the number of rain gauges has been dropping around the world. A 2012 report in the Journal of Hydrometeorology showed that from 1989 to 2006, rain gauge numbers fell by half in Europe and 90% in South America.

Mobile phone networks cover an area that includes 90% of the world’s population.
The idea that the dip in signals from mobile phone masts can be used to measure precipitation was first put forward in a paper in Science in 2006.

The rise and fall of signal strength in each “link” – the path from one mast to another – provides an average measure of how much rain there is between them. As these links criss-cross one another across a region, these simple measures can be mathematically picked apart to yield a map of the rainfall at a given moment.

To test the idea on a grand scale, researchers at Wageningen University and the Royal Netherlands Meteorological Institute acquired the signal strengths from 2,400 links operated by T-Mobile NL, over two 12-day periods in 2011.

The data were compared with those taken using weather radar and rain gauges, and the researchers found good agreement.

“We showed that it is feasible to really monitor rainfall, to recognise individual showers and how they travel across a country,” said Aart Overeem of Wageningen University and lead author of the study.

“It would be most useful for countries where they don’t have much rain gauge data or weather radar – in Africa for instance, they do have mobile phones, at least in areas where the population density is high enough”.

With the method laid out in the new paper, all that is required is the raw data, which must be released by the mobile phone operators.

“For those countries it would be really interesting if [mobile] link data would become available in order to try to make such rainfall maps – and of course we hope that it will become more easy to get data.”