Rain is on the way 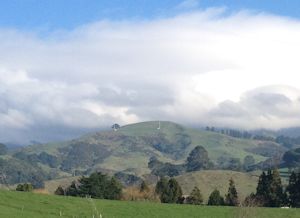 Here in the Waikato you would never believe we have big low churning out over the Tasman.  The fog burned off early this morning and now we have bright sunshine in Te Awamutu and Hamilton.  Even Auckland is seeing some blue sky and sunshine this morning.

But the rain is on its way.

In fact, Northland has already seen rain this morning.  It won’t be much longer before Auckland and the Coromandel Peninsula see precipitation falling from the sky as well.

The South Island could also see some heavy rainfall.  Mainlanders in south Canterbury and eastern Otago could see as much as 100mm between tomorrow afternoon and Monday night.  Many thanks to Government forecaster MetService for that rainfall estimate.

50-70mm of rain may accumulate starting this afternoon and ending late tonight.  Peak rainfall rates of 15-25mm/hr are possible with the heaviest amounts in thunderstorms.

Periods of heavy rain should begin tonight and last through the overnight hours.  70-90mm or rain may accumulate with peak rates of 15-25 mm/hr possible.  Again, the heaviest rates are likely to occur in thunderstorms.

Rain is expected to set in about western Bay of Plenty later this evening and spread east overnight.  From midnight tonight to noon Sunday, 70-90mm may accumulate with peak rates of 15-25mm/hr.  The heaviest rates are expected to be associated with thunderstorms.

Easterly rain is expected to set in Sunday morning and become heavy at times by afternoon, especially inland. From noon Sunday to 6pm Monday, expect 80-100 mm in north Canterbury, 110-130mm in south Canterbury and 40-60mm near the coast. General rainfall rates of 2 to 3 mm/hr are likely with occasional peak rates of 5-10mm/hr.

Rain is expected to set in Sunday afternoon and become heavy at times. From 3pm Sunday to midnight Monday, 110-130 mm may accumulate about the ranges and 50-60mm near the coast. Rainfall rates generally 2-3mm/hr with occasional peak rates of 5-10mm/hr. Further rain is possible Tuesday morning.