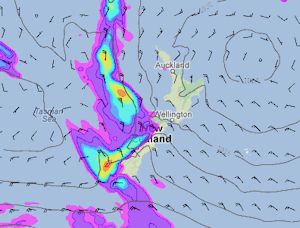 Hawkes Bay farmers would probably love some rain.  But, most of the rain falling in New Zealand over the next few days will likely fall on the people who don’t need it.

Specifically, the west coast of the Mainland.

A frontal boundary, an onshore flow and a short-lived area of low pressure will all be doing their part over the next few days to keep rain chances going over the western South Island.

A few showers will be around today, especially about Westland.  Precipitation chances will then diminish for tomorrow.  Most of the rain tomorrow should be confined to Fiordland.

But, a little area of low pressure is expected to develop and help support the development of more widespread and heavier precipitation for Monday.  Rain chances will slowly move up the West Coast during the day on Monday with some heavy falls possible.  The best chance for heavy rain will be over Fiordland and the southern West Coast.  Some heavy falls could show up over Westland and Nelson on Tuesday.

Wednesday into early Thursday will be the next chance for precipitation about Hawkes Bay.  It’s not a great chance during the day on Wednesday.  But by Wednesday night there is likely to be at least some shower activity.  Rainfall totals will likely be light to moderate.