Rain for the deep south? Dry weather for the North Island? 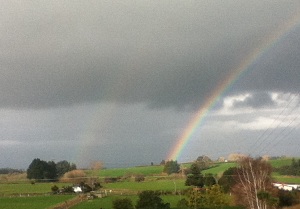 It looks like some decent rain is on the way for the Southland and Otago later this week.

Low pressure is expected to move across the southern South Island on Thursday.

As the low approaches from the west, rain could develop across the northern half of the South Island Thursday morning.  As the day wears on and the low gets closer, rain is expected to move into the southern half.  Invercargill could see rain by early afternoon.  Dunedin could start getting wet by evening, although a few spotty showers may dot Otago during the early part of the day.

Rain chances continue into Friday as well.  The low moves out over the Pacific by Saturday and dry weather returns to the deep south.

The soggy North Island looks to be getting a bit of a break in the rain this week.  A very small bit.

The same low that brought the rain this weekend is in a hurry to go nowhere.  As long as it’s hanging around, it will keep our weather unsettled.  That doesn’t mean it will be raining all the time.  Indeed, today has gotten off to a great start for many folks on the North Island.

Tomorrow though looks to be a bit wetter.  Especially for the Waikato, Taranaki and south to around Wellington.  By wetter, I mean that the rain looks more widespread.  So any given place in these areas has a better chance of seeing rain than they do today.

Wednesday and Thursday, rain chances go down.  Most areas should be dry.

Friday looks like a fairly wet day for the Bay of Plenty and Taranaki.  Most other areas should stay mainly dry.

Next weekend could be a decent one for the North Island.

Yip at lasts the maps do seem to agree with rain for Southland. Big question is how much? what rain we have had hasnt made much or any difference. Days like today dont help either. Currently 27.0c at our station in suburban Invercargill & low humidity @ 39% @ 1440hrs

hey love the stromy weather. plus what do mean next week are you saying we are in for another big strom maybe

sorry forgot to put down where i lived auckland