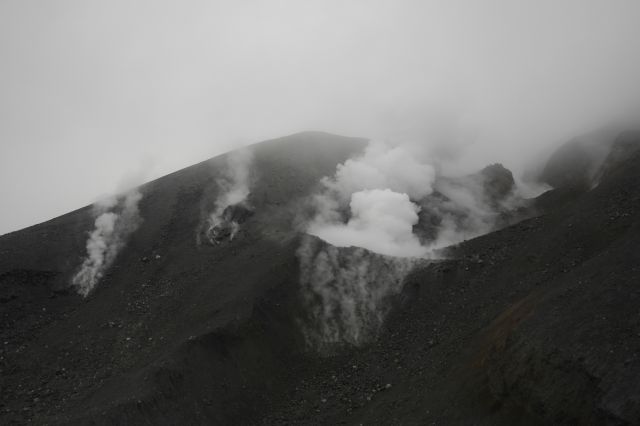 A potentially toxic chemical has been detected in ashfall from Monday night’s hydrothermal eruption on Mt Tongariro.

Seismic activity in the area has been low since the blast, with only a few small volcanic earthquakes recorded.

GNS volcanologist Michael Rosenberg said current eruptive activity was at a low level, but it could recommence at any time.

Analysis of the ashfall by Massey University has found moderate levels of the potentially toxic fluorine.

Professor Shane Cronin said because of the restricted distribution and very thin ash fall it currently posed no threat to human health or agriculture beyond the immediate vicinity of the volcano.

However, if larger eruptions of Mt Tongariro occurred, a significant agricultural hazard could be expected, he said.

“Ashfall can impact pastoral grazing systems by covering pasture, meaning that it is ingested by grazing sheep, cattle and deer.

“Further, livestock drinking water in open troughs may be contaminated.”

The soluble fluorine in the ash was similar to ash from Mt Ruapehu when it erupted in 1995 and 1996.

Mr Rosenberg said analysis of the ash also found that there was very little, or no, new magma in it.

“This suggests that the eruption was predominantly steam driven, but the involvement of magma in the future cannot be ruled out,” he said.

A team from GNS Science and Massey University were now making observations of the active vents and new deposits.

In a so-far-unrelated development, scientists have confirmed that White Island has erupted and continues to blast ash into the air, indicating the start of a new phase of volcanic activity on the island.

Scientists flew over White Island, 51km north of Opotiki in Bay of Plenty, for the first time today, after the island started showing volcanic activity on Tuesday night.

GNS volcanologist Brad Scott said the eruption was a weak one that had opened a new vent.

“This is the first ash emission from White Island since February 2001 and represents the start of a new phase of volcanic activity at White Island,” he said.

Visitors to the uninhabited island were now at the highest level of risk since the end of the 2001 eruptions, he said.

Explosive eruptions could happen at any time with little or no warning.

Black ash was currently rising up to 3000 metres above the active vent on the south-west corner of the crater, Mr Scott said.

Ash spewing from White Island was this evening falling on cars along Tauranga’s coastline and was reaching Papamoa Beach.

Robyn Keereweer, a shop assistant at Papamoa Four Square and Lotto shop told the Herald she would have to wash her car when she got home.

“There’s a very light bit of ash on my car bonnet. It’s sort of whitey-grey. But when I put my finger on it, it disintegrates.”

GNS, which raised a volcanic alert for the island this week, warned people to take care if approaching the crater lake or to avoid it.

– Additional reporting by Vaimoana Tapaleao of the NZ Herald

Mmm, Fluorine/Fluoride, any connection.
We do know that the latter is put into the water supply in the guise of helping lessen tooth decay – yeh right.