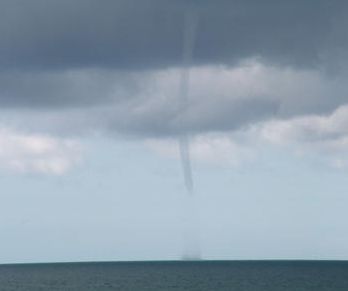 WeatherWatch.co.nz has received 10 photos now of a long, narrow, waterspout which formed early this afternoon off the New Plymouth coast.

Do you have photos of the waterspout?  Upload them here

Reader Gillian Todd said the sky was black and another reader, Robyn, told us she saw it form and then die again.  “Just saw an awesome tornado in New plymouth out at sea… watched it form and spin then go back up lasted 4 or 5 mins!”.

At the time it was warm and humid in New Plymouth with 23 degrees and 70% humidity with winds from the north.

First water spout forms about 19 kilometers off the coast.  Uploaded by: Allen Pidwell

This is the trough that caused the four water spouts to form off New Plymouth.  Uploaded by: Allen Pidwell

The third and seemingly largest dissipated right on the coast. Uploaded by: Allen Pidwell

Above: This is just developing over the New Plymouth coastline. Photo taken 1.50pm. Looks like they have disappeared, but we have the video camera on it in case they come back.  Uploaded by: Sue Martin-Smith 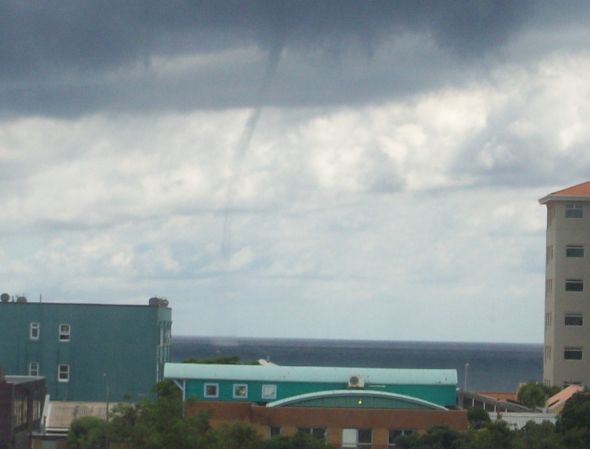 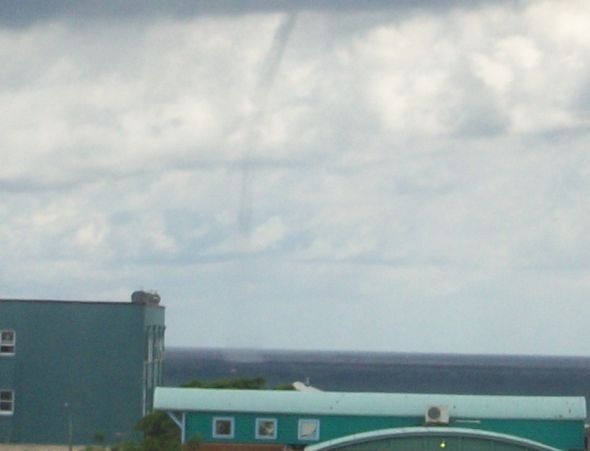 Zoomed in image, you can see the sea water being sucked up 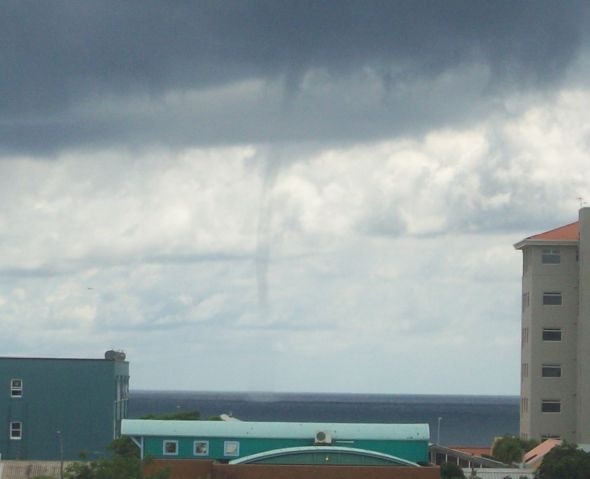 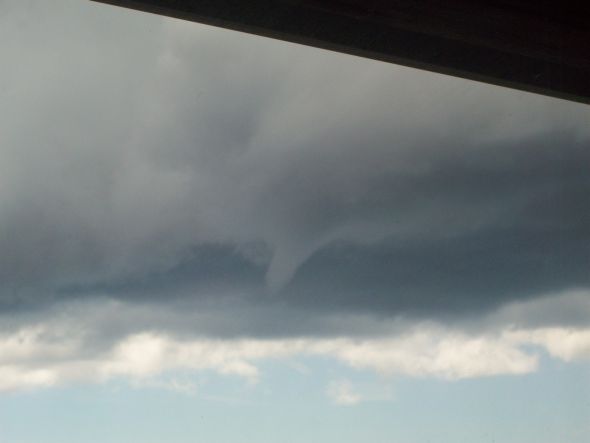 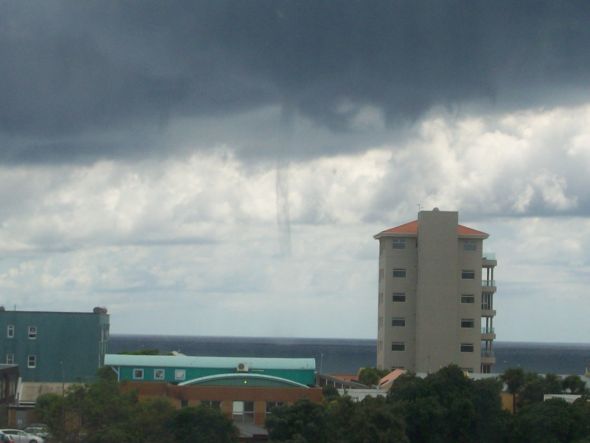 I’ve taken my photos off my cellphone and my camera but I don’t they are any better than what you’ve already got. I did get some good video showing the rotation in one of the later funnel clouds.

Having gone through the photos I can confirm seeing at least 10 funnel clouds in this event off New Plymouth plus 3 to 4 more that started forming but fizzled out. I think only three hit the water.

I saw the first small funnel cloud at 10.45am with others occurring at 11.26 and 11.46. I have cellphone pictures of the 11.26 and 11.46 clouds. In between there was another very long thin one out at sea that may have touched down but was too far away to see properly.

At this point I went home to get my camera. As I arrived home there was another cloud at 12.04 which I photographed. I went back to the office and at 12.14 another appeared. Again these two clouds only lasted 30 seconds to a minute.

Then the waterspout pictured above appeared at 12.44. It was perhaps only 2-3 kilometers offshore. This was the only time I was worried as it was heading towards shore but it disappeared in 2-3 minutes.

At 1.14 another brief funnel appeared for 30 seconds or so.

Then at 1.29 the most spectacular three funnels appeared in rapid succession and there was a funnel obvious for at least the next 15 minutes. Sometime there were two at once. From where I was on Molesworth Street you could see right up under these clouds and see the rotation. A couple of these last funnels touched the water for a few minutes though the spout was not as spectacular as the 12.44 event.

While watching this I saw through the bincoulars a couple of guys out in a small dinghy fishing looking up at what was happening above them. I think they would have had the best view of all. Hopefully they have a camera!

This was a very unusual event simply because of the sheer number of funnel clouds that formed. It was also quite different to the usual Taranaki twisters which normally come in off the sea in a squally southwesterly change that occurs as a front passes. That’s what the event of July 2007 was like.

These funnels all came out of a dark cloud that drifted across the sea just to the north of New Plymouth. Although looking like a thundercloud from underneath there was no thunder that I heard and only a little patchy light rain. The whole cloud was rotating and swirling around and all the funnel clouds I saw were generated towards the western end of the cloud out to sea. They all disappeared as they approached land. Although there was a lot of rotation in the cloud it was very slow moving and took several hours to move from the horizon across to the city. It fizzled out and lost its energy once it hit land.

The cloud was heading towards New Plymouth airport just north of the city so the Met guys there would probably have had a very good view of what was going on. It would be interesting to hear their summary.

I’ve been watching this cloud since 10.30 this morning. Its gradually moved across the sea to the north of the city – moving from west to east.

Its spawned around 10 funnel clouds that I’ve seen including three that have reached down to the sea. However, it looks likes its nearly finished so there may not be much more.

I’ve taken quite a few photos and a few videos but will have to wait until I’m home to get them off the camera. If any turn out well I’ll download them to weatherwatch.

None of the funnel clouds have been especially spectaular – but the sheer number has been amazing.

there is signs of upper level instability around at the moment, so not surprised to hear of a water spout
actually spotted a funnel cloud off the coast here last evening on a line of cloud marking the sea breeze