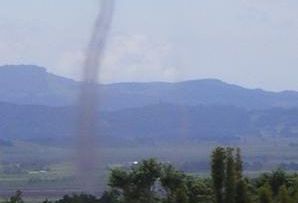 By Mike Barrington – Northern Advocate — It looked like the twisters which lift roofs off houses in tornado-prone parts of the world.

But this dark-coloured, funnel-shaped swirl in the air over the Hikurangi Swamp about 1pm Thursday was not a tornado, according to MetService forecaster Paul Ngamanu, of Wellington.

“It would be more correct to call it a whirlywhirly or a dust devil,” he said. 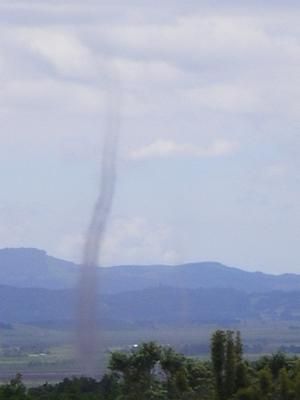 “The way the weather was at that time there would be no chance of a tornado.

“There was not enough wind or convective cloud. You need thunderstorm cloud to suck up air to get a tornado.”

Tornado or not, the appearance of the “whirlywhirly” certainly got those who saw it in a spin.

Ainslee Osborne and her husband Haydn were preparing lunch after doing some gardening around their home in Glen Bruce Pl on the northern edge of Whangarei overlooking the swamp, when they spotted the twister.

“We were stunned,” she said. “There was no wind and it didn’t move much. After a couple of minutes it dissolved.”

About a kilometre away in Crane Rd, Jo Crawford at first thought the twister “right in the middle of the swamp” was smoke.

“It looked like someone had lit a fire. It was quite a sight.”

She then decided it was a tornado.

“The Sky guy was here and he reckoned it was a tornado too.

Advertisement
And there was another one further back, over the hills at Hukerenui.”

Mrs Crawford said she had seen a similar wind formation near Matarau last summer which had been smaller “and a lot tighter.”

Swamp dairy farmer Katarina Ilich was at the kitchen sink in her Tanekaha Rd home when she spotted “this big spiral thing”.

Mrs Ilich believed it was smoke from a fire, but when it soon disappeared she pressed on with the work she was doing.

Her neighbour Ben Smith didn’t see the twister, but he had a possible explanation for it.

“It was probably dust off 80ha Ian Leewenberg is cultivating for maize between Apotu and Rushbrook Rd,” he said.

“There are regular thermal swirls lifting dust there.”

“It sounds like an old dust devil with heating on the ground causing the air to circulate and swirl, and you can see the dust and stuff picked up from the ground in the air,” he said.

I think that should read 1pm Wednesday – same day that both Auckland and Whangarei hit 25C.