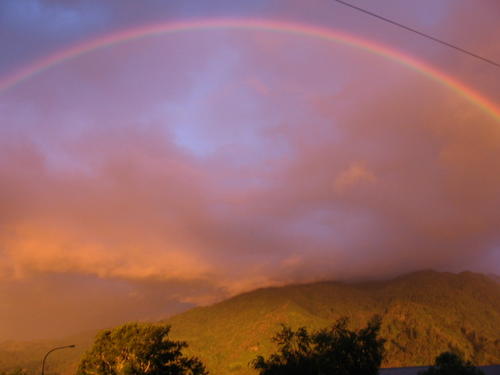 It’s 2am on a foggy Friday morning – yesterday morning to be precise.  As I lie in bed I notice outside the sky is orange, the tell tale sign for urban dwellers that the clouds are down low (and reflecting the street lights)…and in this case, so low the clouds were sitting on the ground.  The thick fog which spent all of Thursday over Waikato and South Auckland had spread further north over Auckland and back over my house.

I lay there feeling content that we’d predicted this fog when the others hadn’t, and happily fell asleep following a very long Thursday.

I woke a few hours later at 6am and this time the fog was much thicker – in comes the anxiety.  Did we predict it to be this foggy?  What time will it burn off?  Will the flights be affected?   Did we do enough to advise passengers?  Did we predict it to be like this yesterday?  Did we predict this accurately enough?  The thought process totally wakes me up and the adrenaline of wanting to be 100% accurate on another important weather forecasting morning meant I was wide awake and starting my day after just 4 hours sleep.  5 hours the night before and 5 hours the night before that.  It’s amazing what adrenalin can do.

Anxiety is something I’ve always had.  I used to think it was a negative but have learnt it can be used to a great advantage.

Nothing annoys me more than being wrong…I hate it.  I accept it when it happens, but I hate it when it happens.  Most people are the same I’m sure, but my brain tends to let these worries go around my head over and over and over.  To make being wrong acceptable to me, you must learn from it.  We have made great progress in learning a lot about Auckland especially, to ensure we get it wrong less and less and less.

But it’s this constant double checking – this constant need to be as accurate as humanly possible – it’s entirely driven by wanting to provide a reliable service to the public, to the news media, to the nation.

On Tuesday, when the flash floods hit Auckland, the decision to alert the media and public was a no brainer – this was clearly something nasty moving in.  But the anxiety hit once we started to disagree with MetService’s severe thunderstorm warning – as there was very little thunder activity.  Torrential rain yes, major thunderstorm activity no.

My colleague Richard Green doesn’t share quite the same anxiety levels as I have – but he is identical when it comes to wanting to exceed expectations.

Richard and I often discuss the concerns of putting out storm forecasts, thunderstorm forecasts – or alerting Civil Defence to concerns we may have.  We don’t make any decisions lightly – some weather alerts we issue take us 72 hours to publish simply because we need to be sure of what we’re doing.  We triple check – but triple check several times a day for two or three days.

Of course anxiety like this can also become unhealthy – and checks and balances are needed to make sure you’re not worrying about something most people don’t care too much about…like the overnight low being 5 degrees when it was really 4 degrees.

Without this need to double, triple and quadruple check information I have no doubt in my mind it would be easy to just ‘switch off’ at 5pm and invest less into bettering ourselves.

I wouldn’t give up this anxiety for anything in the world – it fuels me, but most of all it’s my biggest driver to be accurate.  While I accept no forecaster on earth is 100% accurate that doesn’t mean we shouldn’t strive to be 100% accurate ourselves.

Great article Phil, loved reading it but I do need to advise you to watch that anxiety as it can & will take it’s toll later in life.
I have had similar for as long as I can remember and for similar reasons but nearing my 70th b’day I have a few health issues due to getting all wound up about things. As a result I need to take medication to help me relax.

So where once it used to drive me it now gives me hassles.

hehe you may like to change this (3rd Paragraph). yes I know the incomes are on your mind 🙂
Fantastic forecasting tool story!

I think this passion is a real asset ww has, and coupled with your thousands of dedicated ” watchers” and ordinary folk around nz makes you excellent forecasters- keep up the good work and keep it coming!