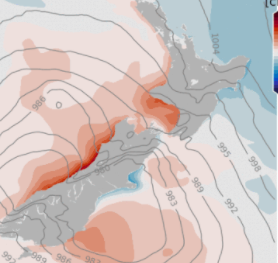 By MetOcean — On February 1, Fehi caused storm surges along New Zealandâ€™s west coast, impacting coastal communities in many locations around the country. In Nelson whole streets were flooded in low-lying areas, causing emergency services to evacuate residents. Coastal residents were also evacuated in other areas including Taranaki and West Coast.

â€œStorm surges occur when the sea rises as a result of wind and atmospheric pressure changes associated with a storm. The surges build up over time and will worsen when a low pressure system lingers.

â€œOn this occasion, our models predicted a storm surge of up to 50 cm in Hokitika, and just over 35 cm in the Nelson region. This may not sound like much but when added to a king tide the impact can be devastating. The wind direction is important too. In this event, the trajectory of the tropical storm caused north-northeasterly winds which acted to push water towards the shore, further raising coastal sea levels.

STORM SURGES OF UP TO 35 CM ABOVE ASTRONOMICAL TIDE COINCIDED WITH HIGH WINDS IN NELSON ON 1 FEBRUARY 2018.

â€œStrong winds are common along the west coast of the South Island, but systems like Fehi that have tropical origin cause a much bigger pressure drop than normal winter storms. Such pressure drops cause sea level to rise, a phenomenon known as the inverse barometer effect.

â€œStorm surges of up to 50 cm are not unusual in New Zealand, and thankfully they most often do not coincide with king tides. However, occasionally the worst possible combination of events will occur, and at such time good forecasting become very important.â€

â€œWaves also significantly modify water levels and consequent impacts of storm surges. We are currently working on improving our models to include waves in storm surge predictions for vulnerable locations around New Zealand. Hopefully such models will contribute towards keeping coastal communities safe when the next perfect storm hits.â€