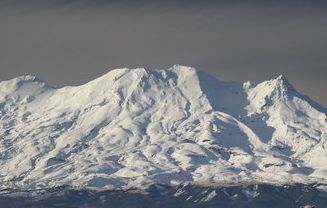 Tears and high-fives followed the rescue of two students from a collapsed snow cave on Mt Ruapehu.

Nine Year 13 students, two outdoor education teachers from Te Awamutu College and a qualified instructor were getting ready to spend the night in the cave they had dug on the Whakapapa skifield when it collapsed about 4.50pm on Thursday.

Two of the youths became trapped under about a metre of snow and survived by breathing from air pockets.

Time was critical, he said, and a St John paramedic raced to the scene on a skidoo, along with three members of the Ruapehu Alpine Rescue Organisation.

“It could have been really bad. We’ve had people die up here on the mountain before,” Mr Smith said.

But by the time the helpers arrived, the other students had dug the two youths out. One was pretty dazed.

“There were lots of tears, and hugs and high-fives,” Mr Smith said.

The pair were shaken up but in “pretty good spirits”, and the group stayed in huts overnight.

This kind of incident was extremely rare, Mr Smith said, and it was only the second time he had ever heard of a snow cave collapsing.

“People sleep in them up there all the time.”

The accident was being investigated, but it was not yet known what had caused the collapse.

Te Awamutu College deputy principal Wayne Carter said both students were pulled from the snow and checked within 15 minutes of the collapse.

“Approximately 10 minutes after the instructor had inspected the cave, it collapsed as the boys had continued digging.

“As part of their alpine training the boys had been educated about how to respond to a wide range of alpine hazards,” Mr Carter said.

“The fact they were able to respond immediately and appropriately to such a hazard is testament to the teaching and learning they had done.”