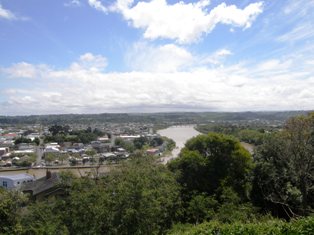 Yesterday we started taking a look at a breakdown of our weather over different parts of the country as provided by NIWA.

Feel free to let us know if there’s anything you’d add or alter.

New Plymouth down to Wellington

Because of its exposure to disturbed weather systems from the Tasman Sea, this climate zone is often quite windy, but has few climate extremes.
The most settled weather occurs during summer and early autumn. Summers are warm. Typical summer daytime maximum air temperatures range from 19°C to 24°C, seldom exceeding 30°C.
Winters are relatively mild in New Plymouth and Wanganui, but cooler in Palmerston North and Wellington.
This is normally the most unsettled time of the year. Typical winter daytime maximum air temperatures range from 10°C to 14°C. Frost occurs inland during clear calm conditions in winter.
Annual sunshine hours average about 2000 hours, but inland at Palmerston North it is much cloudier. Northwesterly airflows prevail. Sea breezes occasionally occur along the coast during summer.

Most of this climate zone is characterised by cool coastal breezes, and absence of shelter from the unsettled weather that moves over the sea from the south and southwest.
Hot northwesterly conditions in summer can occasionally bring high temperatures. Typical summer daytime maximum air temperatures range from 16°C to 23°C, occasionally rising above 30°C.
Winters are cold with infrequent snowfall and frequent frost. Typical winter daytime maximum air temperatures range from 8°C to 12°C.
Hours of bright sunshine average about 1600 hours annually and are often affected by low coastal cloud or by high cloud in foehn wind conditions. Southwesterlies prevail for much of the time about Southland, but northeasterlies are more frequent from Dunedin north.

Both wanganui and palmerston north reaches or even exceeds 30c several times in summer than auckland does.Wellington reaches 30c but less often too in a stable anticyclonic situation or light NE flow.Also all the SW quadrant from Wanganui to Wellington is calm on NE periods which can occur anytime of the year.
Wellington is sunnier in westerly or SW flows if derived over the south island wheres the others have cloud and westerlies.Conversely Wellington can have cloudy N flows along with NP wheres WG and PN are clear.

At the New Plymouth end of the region average sunshine is almost 2200 hours. Wellington city has averaged 2110 hours over the last 30 years, but Levin records (ceased in 1991) averaged about 1850.