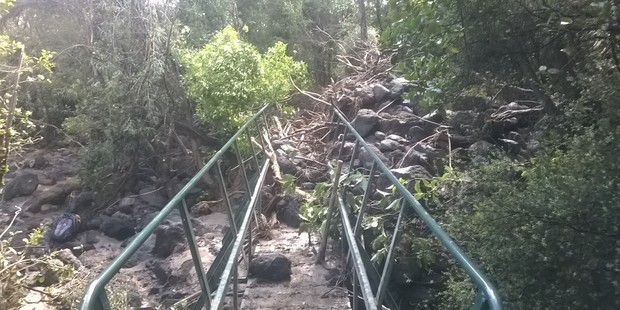 Walkers planning to trek the Tongariro National Park are urged to take caution after a popular crossing was badly damaged due to heavy rain.

Extreme weather conditions overnight yesterday has caused substantial damage to the Tongariro Alpine Crossing- a popular track for many.

Between Mangatepopo and Soda Springs the damage was caused by water and rock movement.

The track in these areas were washed out but was still easily passable by following track markers, the Department of Conservation (DOC) said.

“This event shows just how severe weather conditions can be in Tongariro National Park and walkers need to be aware how quickly the weather can change,” DOC conservation services manager Paul Carr said.

On the Ketetahi side of the Tongariro Alpine Crossing, it was likely the ponded water broke through the dam during the night and washed large boulders and logs down the old path created by the 2012 Te Maari lahar.

“It never ceases to amaze me the damage that can be done as a result of extremely heavy rain and wind,” Mr Carr said.

Walkers were asked to take extra care when passing through these two areas.

However the two new bridges, built after the 2012 eruption of Te Maari, have been covered with rocks and logs and DOC suspected it would be several days before these were cleared.

A diversion was created temporarily around the two bridges and walkers were asked to follow the indicated route through to the Ketetahi carpark.

Department of conservation services ranger Benjamin Scrimgeour hoped the track would be running again over the next few days.

Staff would be working over the remainder of the week to have the track repaired in time for the upcoming weekend.

We’ve received a number of pictures and posts from our readers in Canterbury – with surface flooding caused by heavy rain washing out several roads in the town.

Head to our twitter page, here – and keep photos and updates coming in!