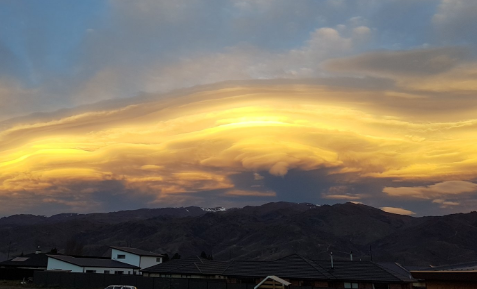 An air flow out of the sub-tropics and over Otago this afternoon and evening is helping create some spectacular clouds across the region.

In Central Otago stunning lenticular clouds have formed due to the north to north west air flow coming in over the ranges. Sometimes these are called “UFO clouds” – especially when one forms all on its own, which can happen in places like Canterbury, for example, with a nor’wester every now and then.

Further east and the air flow is helping create mammatus clouds over Dunedin – really amazing looking clouds and to be honest they don’t form too often in New Zealand so very cool when they do, as you can see!

Thank you very much to Chris Morris, Malcolm Rees-Francis and Tim Slade for sharing these photos with WeatherWatch.co.nz this evening.