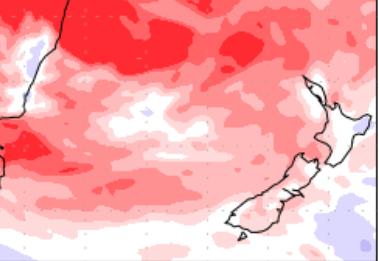 The weather pattern around New Zealand is changing a little and that means more variety in the weather. The main change is a lack of high pressure to the east of the country – this will allow inland downpours to drift further east and allow air flows from the south to also move in easier across the South Island.

Over the next 10 days WeatherWatch.co.nz expects a number of daytime downpours and overnight drizzle patches which will bring some relief to dry parts of New Zealand – despite the overall trend still being average to drier than average.

Long range data suggests western areas of both islands may be drier than usual over the next week, while eastern areas do get better totals back to normal in some spots.

It’s possible the Gisborne area may even be a bit wetter than usual for this time of year over the next seven days.

As we head towards Christmas a more “spring-like” pattern may emerge. While it doesn’t mean a return to serious spring weather it may just be a timely reminder that the true part of summer is really January and February and this is a shift more towards average (but will still likely be warmer than average in many places overall).

Northern New Zealand is unlikely to be affected too much by this shift in the weather pattern but from Wellington southwards many will notice varying wind flows and therefore a mixture of temperatures and windier days too with the Southern Ocean becoming a bit more active weather-wise.

Southland has quite a variety of temperatures. Over the next 10 days two days have highs in the low teens, while two others make it into the low 20s.

Further north and Queenstown today has a high of just 15 degrees but may be closer to the late 20s by Saturday, then a high of just 14 degrees next Tuesday with some wet weather.

Canterbury is also in the mix for a more spring-like pattern leading up to Christmas. Today’s high is around 19 or 20, then closer to 30 from Friday to Sunday before tumbling back to highs in the teens next week.

Wellington will also experience a more “spring-like” pattern with daytime highs bouncing around from as low as 18 to as high as 26. Wellington looks mostly dry though.

But if you head further north then expect the summer pattern to continue rolling through with no significant changes in temperatures coming for most North Island centres. If a westerly flow kicks in next week that may drop some temperatures in the west and inland by a degree or two but places like Auckland, Tauranga, Hamilton, Napier, Gisborne and Whangarei are all likely to be in the mid 20s still. However the North Island has plenty of downpour risks on Sunday and Monday.

The change in weather pattern will mean a few more downpours (mainly inland) but the general trend is still drier than average for NZ (see the map below).

WeatherWatch.co.nz has been saying since September that summer may well have areas of “big dry” that form but also an increased risk of inland heavy downpours and even isolated flash flooding. This coming Sunday and Monday there may be some very heavy downpours inland, across both islands. There’s also a chance of severe thunderstorms for some too – but it’s too far out to lock in just yet.

As for Christmas to New Year’s Eve, that is just too far out to lock in but there are some signs of the westerlies dominating then and perhaps some rain around the West Coast. We’ll keep you posted! 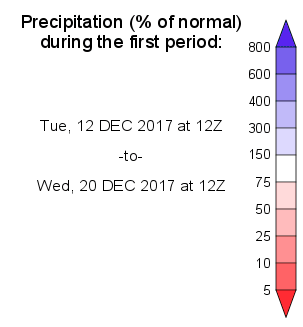 – Image and data courtesy of the US Government