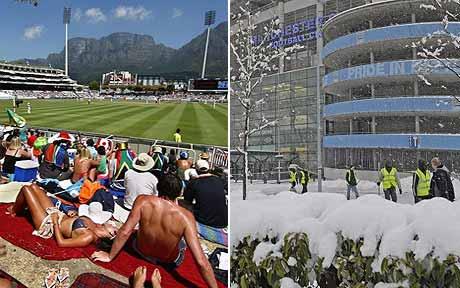 Over the weekend we’ve seen terrible weather conditions affect the British Open golf tournament with wind and rain blasting the golf course but we’ve also had our moments of weather affected events in this country as well.

In 1975, the All Blacks took on Scotland on a flooded Eden Park making the game almost a farce. The ground was waterlogged and will be remembered more for the conditions than the actual skill level of the players.

Carisbrook in Dunedin has seen a couple of snowy All Black tests over the decades and also Athletic Park in Wellington was the scene on more than one occasion where a howling southerly with driving rain was the star of the show.
In one All Black Match, the Wallabies froze and were skittled by the homeside by 43 points to 6 during a stormy southerly outbreak.

In Christchurch several years ago, Queenslanders were treated for hypothermia after a Super 14 match played at the then Jade stadium. A biting and raw cold affected several players throughout the 80 minutes and it wasn’t a clash remembered for the final scoreline.

During the summer months, you’d expect to have conditions more idyllic for outdoor sport however a cricket game in Central Otago many decades ago saw a local XI coming off the field for hail, sleet and snow showers.
In Gore in the late 1960s, snow affected many sports grounds on Boxing Day as a storm swept through the Southland town.
One cricket test in Dunedin against Pakistan was abandoned as five days of rain and cold conditions made the game a washout.

The Rugby World Cup is on our doorstep and will the weather play a part during the spring months?
In this part of the world we can expect the unexpected and only time will tell what the heavens have coming up for the big occasion.