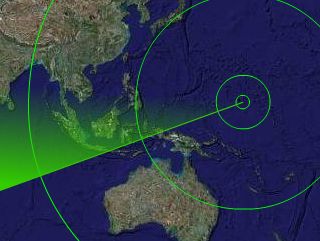 After what had potential to be a very bumpy journey, New Zealand has arrived at the East Asia Summit.

En route to the meeting of 16 Asia Pacific nations, the RNZAF Boeing 757 carrying Prime Minister John Key and his entourage developed a problem with its weather radar half way between Darwin and Ho Chi Minh City.

That left pilots with an uncertain view of where the worst tropical turbulence was lurking in their path.

The prospect of popping a U turn and returning to Darwin to continue the journey in the RNZAF’s other 757 parked there was considered but the decision was made to continue. As is it happened, the air force’s pilots dodged the worst of the rough stuff, safely delivering the Prime Minister onto the tarmac in Vietnam.

But New Zealand’s journey to the East Asia Summit (EAS) has been fraught with potential pot holes of another kind.

The summit will see Mr Key become the first New Zealand Prime Minister to have a separate formal meeting with leaders of the 10 Asean nations that form the core of the EAS.

After 35 years of engagement with Asean, New Zealand has recently attained “comprehensive partner” status with the organisation.

It remains to be seen whether that is largely symbolic or represents a truly useful advance in our relationship with South East Asia.

Symbolic or not, that status has come as a result of this country’s willingness to put aside its concerns about Myanmar’s human rights record and lack of true democracy. Asean’s way is to partner up one of its members with those nations seeking a closer relationship with the organisation for talks. By a quirk of fate, our partner has been Myanmar.

Our discomfort with Myanmar’s regime, concedes Foreign Minister Murray McCully, did mean we were reluctant to talk with them and advance our relationship with Asean.

At last year’s EAS, little more than a 12 months after Mr McCully was – in opposition – referring to the “butchers of Burma”, Mr Key may have been a little uncomfortable holding hands with Myanmar Prime Minister Thein Sein while leaders belted out the EAS’s rousing anthem in what is a summit tradition.

However Sunday’s Asean-New Zealand Commemorative Summit after the fulll EAS demonstrates we have been talking and progress has been made.